Whenever I've Had Worse is trashed by taking net or meat damage, draw 3 cards. 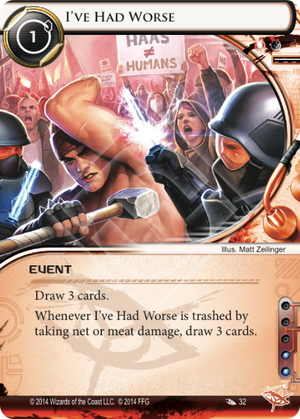 This card is fantastic, and I plan to play 3 in every deck, completely replacing the need for Plascrete Carapace. "What's the point of Steelskin then if it can't save the runner from certain death?" The point is that you very rarely have only 2-3 cards in your hand, especially against Weyland. What's more likely is that you have 5 cards, the corp plays Scorch, and you lose 4 of them. Even if you're only holding one of these, there's an 80% chance that the first Scorch will hit it. You'll go back up to 4 cards, which is conveniently just out of range for the second Scorch. Better yet, they didn't know you had it, so it's harder for them to plan around (unlike Plascrete). A crafty corp can figure out a triple-Scorch if you have a single Plascrete out, but if they don't know for certain that you have some kind of defense, they probably won't.

Honestly, if this card is as good as I predict, we may see more Traffic Accident than I was thinking. An Accident has a 60% chance of dodging a single I've Had Worse, and will put a 5-card hand down to 3 (just in range to Scorch without worrying about the I've Had Worse). But the 2-tag requirement makes it harder to pull off. Either way, it makes the deck weaker, and only works 60% of the time, so I'm super okay with that strategy existing.

Anyway, the main thing this card has over Plascrete (besides the secrecy I mentioned earlier) is that it doesn't become a dead card in non-Weyland matchups. Even against a deck that you're certain doesn't run any net/meat damage cards, this is still a 1 Diesel. If Diesel costed 1, would you still play it? I know I would, especially in-faction. This card is fantastic in Anarch, and I'll probably still be shelling out 6 influence to put it elsewhere.

The last great thing about this card vs Plascrete? If you're uncertain about what your opponent is playing, you can wait to use it, and all it does is take up a spot in your hand. When you're running Plascrete and you find yourself against NBN: Making News, you're never really sure if they shelled out the influence for Scorch. Do you shell out the 3 credits and a click (or 6 credits and two clicks if you want two of them) for your Plascrete, or do you take your chances and not play it? You won't find out the correct answer until it's too late, but 3 credits is a lot of money sometimes, especially early on. It's just another reason I hate playing Plascrete and love about this card.

So, to summarize, this card is better than Plascrete because (1) Your opponent has a harder time playing around it, (2) it can be used as a draw card if you don't need damage prevention and (3) it doesn't cost anything to use as protection. The only things Plascrete has over this is (1) Sometimes that first Scorch will miss it if you're only holding one, (2) it prevents one fewer damage, so if you're only holding 4 cards, they can still get you with 2 Scorches, and (3) it costs 2 influence outside of Anarch.

The decision between the two seems pretty obvious to me.

I realize I'm probably in the minority in my opinion on this card but I wanted to write down my thoughts. This is not my favorite card. First off, I don't even like Diesel all that much. After the click you spend to pick it up and the click you spend to play it, you are only saving one click. That's not to say I don't use the card, I do. A click is a click and click economy is very important. But if I have the room I usually prefer to go the PPVP/Quality Time or Career Fair/Earthrise route. Now on to I've Had Worse; after the click to pick it up, the click to play it, and the 1 credit play cost you aren't gaining that much. Again I do use the card sometimes. In faction I might use it especially with PPVP to offset the credit cost. I'd usually prefer going with Wyldside/Chronotype though.

Now all the above ignores the cards main function. If this is triggered by taking net or meat damage (unfortunately not brain damage) it becomes much more efficient and of course could save you from a flatline. There are even scenarios where you could trigger this yourself with the help of cybernetics. Without cybernetics though, what percentage of games do you run into meat damage or consistent net damage? Maybe 50%, probably less. I'm sure that number fluctuates. The point is the ability won't be used in every game.

We do need protection against damage though, and as noted in other reviews, there are several advantages to this card over Plascrete. There are some disadvantages though;

-influence cost when used out of faction; 6 influence if you include 3

-if you are left with 3 cards in hand, this won't protect against a single Scorched Earth, plascrete will

-if you have 4 cards, possibly even 5 cards in hand, this won't stop a double Scorched Earth, plascrete will

In conclusion, this card is a viable option for protection from a flatline, and one that won't be a dead card if you aren't taking damage. But in my opinion, it's not for every deck. Stay safe on the net!

Edit: If you are running Comet, both I've Had Worse and Diesel are really great includes.

Edit: In light of the myriad of new ways to tag the runner (like Hard-hitting News) and many new damage cards (like the new Weyland ID and the upcoming DNA Tracker) that are being released, this card has grown on me. I usually do include the three of them in any anarch deck.

(Data and Destiny era)
quailman2101 246
Actually, with 5 cards in hand, this included, you are able to stop double scorched earth, leaving you at 0, as they resolve one after another. Good thinking though. I'd rather a suit of plascrete, but flavor-wise nothing says screw you like standing up after a bazooka to the face. — H0tl1ne 3 Jan 2016
Not if the first scorch happens to miss I've Had Worse. Chances are it will, but it could miss it. — quailman2101 3 Jan 2016
It only costs a click to draw I've Had Worse if you don't have any other draw / tutor ability... such as I've Had Worse. You also fail to note the signalling difference between having to install a Plascrete versus merely holding an I've Had Worse. This is flawed analysis. — PentagonJR 4 Jan 2016
And you fail to realize, PentagonJR, that if you didn't have I've Had Worse in your deck, the free draw would of drawn another card. So my point is still valid. And I noted quite plainly that there are several advantages to I've Had Worse over Plascrete as noted in other reviews. I choose to note the disadvantages not listed elsewhere. — quailman2101 4 Jan 2016
1

Also, the Golden Rule can hardly apply because an inactive card cannot contradict the rules, obviously.

This little problem aside, this is a great card for the Anarch. It can work as a subsitute for Plascrete Carapace but also works against net damage. It can unexpectedly save your butt, which is even worse for the Corp if a SEA Source and a Scorched Earth have been used with no tangible effect.

What isn't clear is: what happens if the amount of damage is superior to the number of cards in the grip? Is the Runner dead or does Steelskin trigger and save him?

And if the Corp does not mean to harm you, the card is still useful to draw cards, even more with a Prepaid VoicePAD.