Her eyes were the color of a vidscreen, tuned to a dead channel.
Jinteki • Lili Ibrahim • The Spaces Between 25
All sets:
Links: Decklists | ANCUR 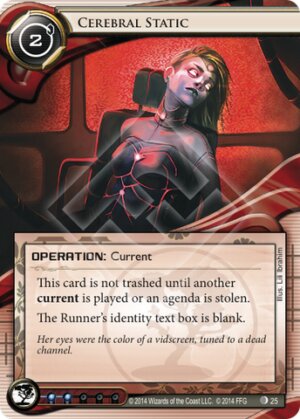 Countering your opponents' moves is an integral part of Netrunner, and one which is slightly harder for the Corporations. The Runner will have tools to disrupt the Corp in any number of ways; raising rez costs, trashing assets, milling cards, etc. By their nature as an attacking force, any time they attack you they are disrupting your plan.

The Corporations are a defensive force, and as such only have limited ways to disrupt the runner. ICE is the obvious one, and there are a lot of very powerful Operations suchlike. But almost all of these require the Runner to attack. There do exist very strong Corp counters; Sunset and Tenma Line completely counter Escher, but you will almost never see them played. This is because for all the decks that don't run Escher, those cards are useless. If a card is in your deck as a counter, it should either be good in its own right (Such as Jackson Howard countering Indexing), or it should affect almost everything (Enhanced Login Protocol will work against almost every runner, although it does not directly improve your ability to score agendas)

Cerebral Static is a card that many people look at and say 'It doesn't affect Andy, The Prof or Val, so it's a situational counter'. Technically true, but also very wrong. Against those three, yes, it's rubbish. Against everyone else in the game it is usable. It is also not dependent on game state, as with the exception of those three identities, Cerebral Static affects a card that is always in play and active.

Its effects are widely variable; at its worst it does literally nothing, but at its best, against Kit or Noise, it undercuts their entire deckbuilding effort. Against the vast majority of Runners it acts as a tax, costing them credits in several cases, or removing tools that they would otherwise use against you.

Tl;dr: Cerebral Static affects the game against almost every runner for almost every conceivable board state. It is really worth taking for a spin.

(Order and Chaos era)
Jashay 698
Even against Andy/Prof/Val, it can be used to end the runner's current, so the only time it is truly useless is against such runners that also aren't running any currents (which is extremely rare.) — EnderA 24 Jul 2015
When is a deck legality check performed? I assume it's just before the game. But if the legality check is ongoing this card would make any Professor deck illegal and you'd win by default. — quailman2101 10 Feb 2016
Pretty sure they wouldn't introduce a card that said "If playing against professor, win." Deck legality is only checked at the start of the game, changing game state doesn't make a deck invalid. — yourfriendmisery 9 Apr 2016
5

With this card, you are absolutely crippling about 90% of now and future Runners. If this isn't worth the shot, I don't know what is.

As everything interesting about its mechanics has already been said by those who came here before me, I'd like to add one thing and one thing only:

Ladies and Gentlemen, hats off for a single most awesome reference in a flavor text ever.

Cerebral Static is an interesting current that can interfere with a lot of runner's game plans. However there is a very strange and unlikely circumstance where it can help the runner! (Note: If you play against someone who likes to use Cerebral Static you should do this in a casual game just to blow their mind)

Apex: Invasive Predator cannot install non-virtual resources, but there's nothing preventing it from including them in the deck. So the trick is this: Keep some high impact resources like Aesop's Pawnshop, Kati Jones, Political Operative, Symmetrical Visage, Personal Workshop or Wyldside in your grip and wait for the opponent to play Cerebral Static, as soon as they do you install all your non-virtual resources. You can also install resources like Same Old Thing, Daily Casts or Scrubber. Now this kind of combo is by no means realistic or even reasonable - but if you manage to achieve it the look on your opponent's face will make it all worthwhile.

(Democracy and Dogma era)
Zakalwe 471
Suggesting that you include non-virtuals like Personal Workshop in Apex that take up 4 influence each is a little odd, don't you think? I mean what happens if your opponent decides to use ELP instead? — Goldstep 3 Apr 2016
It's purely for the fun factor against a particular Cerebral Static loving opponent. I think it's clear that this isn't being promoted as a tournament winning strategy. — Zakalwe 4 Apr 2016
3

The flavor text on this card is a reference to the opening lines of William Gibson's novel "Neuromancer," which is perhaps the first great cyberpunk book: "The sky above the port was the color of television, tuned to a dead channel."

Netrunner is full of little references to Gibson: William Gibson also popularized the term ICE, and a major character in Neuromancer was named Armitage (Armitage Codebusting).

When you splash this it's likely against a bitter series of losses to someone in your local meta. I've found that it actually gives my Weyland space ice deck a fighting chance against Leela and Quetzal.