The Tenma clones became Jinteki's third highest-grossing line ever due to the rapid urban expansion that occurred after the war. Their unparalleled reaction times, safety records, and punctuality have made them the top choice for shipping and transportation services.
Jinteki • Smirtouille • Honor and Profit 12
All sets:
Links: Decklists | ANCUR 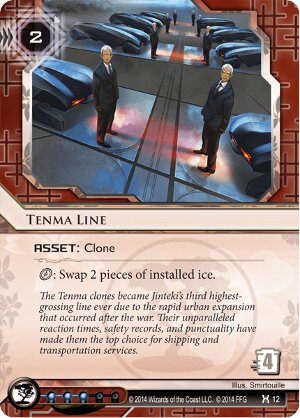 A criminally undervalued card, Tenma Line can do a TON of work for very little investment.

At first glance this card merely looks like a way to compensate for the unreliability of position-dependent ice like Chum and Inazuma. Making a wonky combo slightly more reliable isn't a bad thing, but deckspace is extremely tight, and you quickly start enacting a sunk cost fallacy. Played solely for that purpose, it's hard to justify Tenma Line.

But now honestly consider just how often you have to play ice in sub-optimal positions. Sometimes it's hard enough to draw ice period, let alone the ice you actually wanted. Sometimes you have to install a Crick on R&D, or a Yagura on a remote. Sometimes the Pop-up Window you installed early on R&D just isn't cutting it 10 turns later when you're getting slammed by Medium or Keyhole, so you want to swap it out with the Tollbooth protecting your currently empty remote.

While some runners just build up a gigantic rig that doesn't care about your board state, most of them spend a lot of time and energy probing your defenses to figure out exactly what they need to get into the server they want. Tenma Line can throw a wrench in those intricate strategies, granting your ice a frustrating amount of fluidity, especially when you don't have enough ice or credits to just keep stacking them on the server that's being attacked.

Yeah, that's only the A through C. I could keep going.

Tenma Line's true utility can be difficult to see in principle, but in practice it will often surprise you. Some decks legitimately don't have space for it, or don't have the right amount or type of ice to justify it, but I would recommend giving it a shot, especially in Jinteki decks. It opens up a lot of strong plays for a relatively small cost, and tends to defend itself.

(The Universe of Tomorrow era)
Bigguyforyou518 1698
In particular, your All Code Gates All The Time deck benefits GREATLY from Tenma Line. It's one of my favorite plays. I've watched runners burn half a turn putting up a sentry or barrier breaker after I Tenma'd an unrezzed ICE into the server they were hitting. Moving around a rezzed Tollboth is fantastic. — GrantZilla1979 13 Jan 2016
I think it could be realy fun with the yet to come AgInfusion: New Miracles for a New World. The position of any unrezzed ICE matters. — de-mil 14 Feb 2017