Whenever you install a virus program, the Corp trashes the top card of R&D. 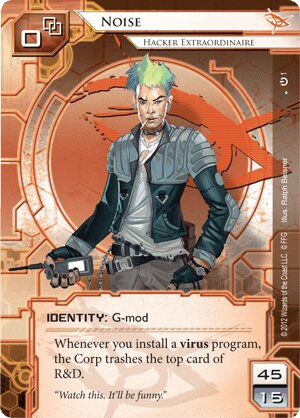 "Hellooo Netizens! And welcome to another evening of Just Run With It; virtual lives, virtual news, real stories. I'm your host, David Farkenburger. With me, as always, are my fellow panelists and professional experts, good evening to you all.

Now, tonight we'll be making some Noise, if you will, about a certain notorious figure out there in virtual circles, but also of a group, a group it's been said are close to some people's hearts, and on everyone else's nerves. Yes, I am of course talking about 'Anarchs'. So, what is an 'Anarch', exactly? An aimless, angry bond loosely shared by hypocritical malcontents, who would sooner spend the rest of their drug-addled lives spray-painting a giant middle-finger to the modern world, instead of enjoying even some of its benefits, or not? And is this Noise Reilly really deserving of his worldwide reputation, or is this hacker extraordinaire(ly) overrated? Those are the questions, and these are the answers.

My first expert on today's show is a veteran of the internet, and will be recognisiable to some as the 'Virtual Mom' of internet disputes - Judith Fondlove. So, in your opinion what are we to make of these people? Angry hooligans or merely misguided youngsters?"

"Oh, definitely the latter Dave. Y'know, a lot of people have this image in their heads of order vs chaos with them, fighting to bring down 'the man', but did you know their actions often improve the precautions taken by companies? I mean, yes his fondness for everything virus is a bit worrying, but before young Reilly came along, when was the last time your saw a corporation do something like guard their junk? When?...Exactly. They'd just leave it all exposed, for anyone to fumble around with. No-one needs to see that. Also these are some of the most worse-off kids on the block. Trust me kids, if you want to be like Noise, you'd better really want it, because he has to go out and make his money the hard way just like all the rest of us. Right now, he's impressive. If he could just focus his energy, his heart, into doing something for the good of society, then I think he'd be truly extraordinaire(y)."

"Thank you Judith, very sentimental indeed. Now, next up we have a man with a not so charitable view of our Irish-Chinese computer-whizz. Former hacker turned full-time virtual opinion-haver after his rig got eaten by its own programs, Mr. 'Sux2Run'. Care to share your thoughts?"

"Pfft, whatever. Why we even talking about this guy? Oo, look at me, I've got green in my hair! Oo, look at me, I'm so poor and have to get by on just my wits. Bull! The only reason he runs with almost no money is because, say it with me - He. Doesn't. Need. It. I mean please, some grungey underground punk just so happens to also have the best frackin' tools on the market? Just happens to have cutting edge jack-juice? Has a magic hacking pot AND internet genie to fetch aything he needs? And if he messes up he can just get it back?? Yeah, Ji- 'Noise', Reilly had to work hard with all that doing it for you huh? Clickety-click you can suck my-"

"Woah now! Ha hahhh, hoo...tempers running hot tonight, obviously. We need to take a quick break right now, but don't go anywhere! And if you've just joined us, don't forget to also catch our previous episodes, including last week's 'Gabriel Santiago - Smooth Criminal, or mostly 'armless?' All that and more, after this..."

(Blood Money era)
Tirranek 539
You are the best reviewer on this site, bar none. Although I thought it was Weyland that had all the frackin' tools... — LordRandomness 13 Sep 2016
11

Noise, like most Identities in the Core Set, has led an active life. He is often picked up by runners looking to play something ‘a little different’ if only because his ability is still a powerhouse. It is commonly seen by Timmy and Johnny players as a gateway into a glory run - get those seven points into the Archives and run, only ever having to run once. No need for ice breakers, no need for dealing with the corp besides one great all powerful run. Some even take it further, putting in cards like Data Leak Reversal and more to ‘mill’ the corp down to run them out of cards and win the game that way. Spike players will see it in a different light - disruption of the Corp’s game plan by tossing cards they may need, as well as making them consider protecting Archives, spreading their ICE thinner. Either way you look at it, Noise’s ability is powerful and a direct disruption on the Corp, a solid Anarch trait.

Noise took a huge hit with Jackson Howard being released. The glory run was mitigated to a high degree, making it possible for corp players to steal back those agendas from Archives, denying that single, awesome, seven point run. Noise took a hit for many data packs, but is coming back into the forefront again as cards like Cache and Progenitor give new life to virus based strategies. In addition, the Shards; Hades Shard and Eden Shard can give you a win - either with an access of Archives with Hades that that the corp cannot respond to (if you hard install it) or by forcing the corp to draw with Eden when they have 1 or 0 cards left in their deck.

As with all the Core Set identities Noise is always going to be a figure in the future. His design space is not horizontal, it is original, and he will be one of the first things new Netrunners have to deal with when looking at red across the playscape. Noise’s ability will always be relevant; there will always be new viruses. From the virus filled mill decks to the combo heavy Chakana, to any number of new design spaces that will be explored in the future with the Virus keyword, Noise will remain a constant threat to Corp’s progress everywhere.

(Written during the release of The Valley, SanSan Cycle, for the ANR Blog Wyldside - See more at wyldside.blogspot.com )

"His design space is not horizontal". What does that mean?

Fun fact: The current timing structure of turns does not permit Noise to win by card mill against a Corp with a scored Hades Fragment. According to the current timing structure of turns, "When turn begins" conditional abilities trigger on step 1.2 of the Corp's draw phase. The Corp's mandatory draw occurs at 1.3. Furthermore, other than scoring 7+ agendas, Page 3 of the rulebook states that "...the Runner wins if the Corporation must draw a card from his empty draw deck." Therefore, forcing the corp to trash a card from an empty R&D does not currently satisfy the Runner's alternate win condition. However, a well-timed Eden Shard WILL.

(Order and Chaos era)
ADHiDef 52
if such a situation should occur, run archives to trim out the agendas. If too many points have been removed from the game as well, this could theoretically lead to a softlock though — GammaCodeX 28 Feb 2015
Unless they have a Daily Business Show installed, you mean? — JAK 28 Feb 2015
2

Noise's ability contains one of the rarest and most powerful effects in all of Netrunner: the ability to FORCE the Corp to do something. We have forced de-rez cards and some rare forced trash effects, but Noise is in a league of his own. His ability alone forces the Corp to build a certain way; if you don't have Jackson Howard in your deck, you had better have a plan for your archives protection.

There is almost no downside to his ability. Putting a Cyberdex Suite in the trash could lead to some bad times (heh), but other than the nightmare matchup with IG, trashing Corp cards is just a solid move. He's very versatile and can be horrific to deal with.

(Breaker Bay era)
|_Preacher_| 95
Noise vs. IG isn't actually as bad for Noise as it seems, as IG decks normally run a lot of assets, and little ICE. T — Nerdfighter 13 Jun 2015
oops. accidentally hit enter there... Anyway, against an IG deck that will out-economy and then out-attrition the runner, Noise can mill you, and use the glory of the Imp to negate the trash costs. Against an IG that tries to win by agendas, then Immolation Script and Cutlery can slow him down enough to mill his fast cards. I'd almost say that Noise's worst matchups (non tag-me) are Astro-Biotics and Blue Sun — Nerdfighter 13 Jun 2015
Blue Sun is the worst match up for 90% of runner decks. — quailman2101 29 Oct 2015
I think Noise has undergone a lot of change since the core set. In the core set, he had a very cool, different, and powerful ability- but one that would only trigger maybe 6 or 7 times in a game. Now there are an endless supply of viruses, meaning he will probably be milling a card from R&D at least once per turn. 3 Jacksons can't begin to keep up with that, especially when they may get milled themselves. Cyberdex will be great in certain circumstances, but many times, Noise players don't particularly care about their virus counters. Since most of them cost 2 or less (and this is forgetting about possible cyberfeeders) these viruses actually turn into money with Aesop. Using a click to trash the top card of R&D and gain money?... yes please (the most outrageous example of course being the cyberfeeder, grimoire, cache, aesop combo). Now with Faust out, he can make almost any run on the few occasions he needs to. Anyway, he just seems to be super powerful now and hard to play against. — quailman2101 29 Oct 2015
The new NAPD changes hurt Noise a little. The parasites cost more and clone chips. But he has 3 Deja Vu's to compensate. He is still grossly overpowered. — quailman2101 4 Jan 2016
The new MWL has finally put a bit of a restraining bolt on Noise. I honestly was thinking the only way to fix him would be to release several cards that were not only good against Noise but also useful in any deck (this would probably mean ICE that was antivirus but also had an EtR sub). But the new MWL has several cards on it that were staples in Noise decks. Now Noise could still include 3x Wyldeside, 3x Parasites, 3x Cache, and 3x Aesop but that is it. No room for Faust or D4v1d in this build! I'm elated at the change. I only play casually on Jinteki.net and honestly had flat out refused to play against Noise for the past several months. He was too powerful and not fun to play against. This change will make it fairer to play against him. He is still a strong contender though. — quailman2101 2 Aug 2016
In a surprise move, Noise is rotating out. I think this is for the best. — quailman2101 13 Sep 2017