As an additional cost to make the first run not made through a card ability on his or her turn, the Runner must spend click. 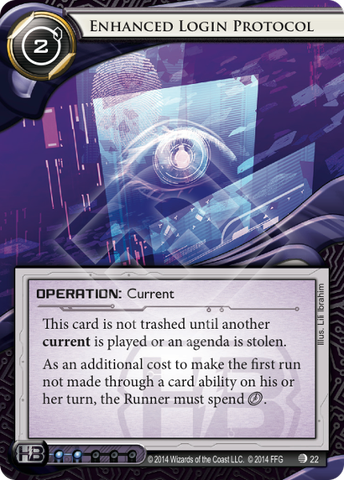 The only card where, after a game, my opponent has picked it up and mimed tearing it in half in animal rage.

In a corp deck with a decent few assets this card is breathtakingly annoying.

Give it a try. Or don't, and enjoy your innocence. Stay young. I was like you, once. I was so beautiful...

Pure click compression against decks that run few run events. Less great against Ken "Express" Tenma, and Criminal in general but it may be the new hotness for Jinteki Replicating Perfection.

• It's a current, so the effect sticks around and is hard to remove.

• It can be played around (digging for Dirty Laundry, The Maker's Eye, Legwork, Siphon, etc.) but this buys time anyway.

• Despite its persistent nature, it is not installed, therefore no Interns retrieval.

• Weaker against decks that tend to run only once per turn (e.g. Kit, Reina Roja).

• Like all currents, "random" lucky digs can blow your investment, so you tend to try to defend centrals harder.

• The effect is telegraphed in the Corp's turn unlike, say, a surprise rez of Ruhr Valley or Off the Grid.

• Jinteki RP; a little bit of influence tweaking is required but directly replaces Encryption Protocol in that variant.

• Bioroid Ice all get stronger with less clicks available to the Runner.

• Anti-synergy with Heinlein Grid; without spare clicks to spend/lose, this region likely won't fire under ELP.

• Strongbox: if the Runner doesn't see this coming, and plays [click]:draw, [click]:gain credits, [click, click]: run the scoring remote, then they haven't got a [click] to spend to steal an Agenda.

• Ruhr Valley, rezzed after the Runner's second [click], this requires 3[clicks] to initiate a run on the scoring remote and provides a one turn soft lock.

• False Lead: with ELP down, forfeiting False Lead to make the Runner lose clicks 2 & 3, this also provides a one turn soft lock against any runs (not involving run events)

This is one of my favourite cards in the game, and one of my most splashed cards when playing a corp deck. In my opinion, one of the best taxes that you can impose on the runner is a click tax. The reason for this is because clicks are always going to be a scarce resource. Money fluctuates -- runners can be rich or poor, meaning that taxing their credit pool is not always going to be able to prevent them from running. Clicks, on the other hand, are virtually always 4 a turn, and the cards that allow runners to have extra clicks come with big caveats and/or are seldom played. Less clicks means less naked remotes checked, less clicks means less accesses on centrals, less clicks means less installs, less operations played, less draws and less click-abilities activated.

Think of the value you can get from ELP over the course of the game. Let's assume that ELP's effect activates 4 times before accessing an agenda, for a single card, 2 credits and a click you have effectively drained 4 clicks from the runner. That is quite good value, and in my experience, 4 activations of ELP is on the low side. ELP also helps itself out -- if runs are the method runners use to steal agendas, and clicks are the way that you run, then ELP taxing their clicks means that they get less accesses, meaning it gets to stick around longer.

With ELP, you generally want to have a low agenda density, or difficult to steal agendas (looking at you TFP/NAPD). The more times you can force them to run, the more value you get off of it. It is also useful in decks that have assets the runner wants to trash, because not only do they not get to get rid of ELP, they also have to pay the trash cost on top of the click cost.

Very good card. Throw it in your corp deck, and I think you'll be impressed.