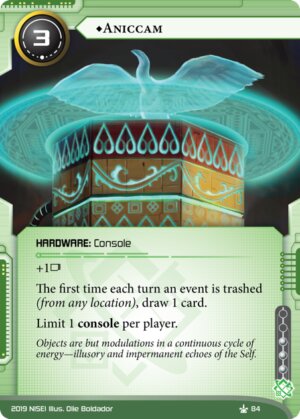 The first time each turn an event is trashed (from any location), draw 1 card.

Objects are but modulations in a continuous cycle of energy—illusory and impermanent echoes of the Self.
Illustrated by Olie Boldador
Decklists with this card

Buffer Drive does not work, as playing an event first puts it in the 'play area', then trashes. This allows Aniccam to trigger, but not BD, since it states 'from grip', making it useful for damage and trash costs / effects ( MaxX, Patchwork ).

They didn't state played events in the Buffer Drive point. If you trash an event (say because of Patchwork), Aniccam and Buffer Drive will both proc.

They didn't point that out, either.

Why wouldn't Maxx work? The text says "from any location". Shouldn't this include the stack?

Maxx will totally work with Aniccam.

LynxMegaCorp: what I ment with Buffer Drive trigger was, when damage caused events to be trashed, you would both get a draw from Aniccam and use BD (i have clarified this in the review).

Shieldwall: yeah you are right about MaxX, I have updated the review! Thanx

What if: I draw until I have six cards, then, in my discard phase, I trash an event to trigger Aniccam and draw again. I can keep the sixth card, can't I?