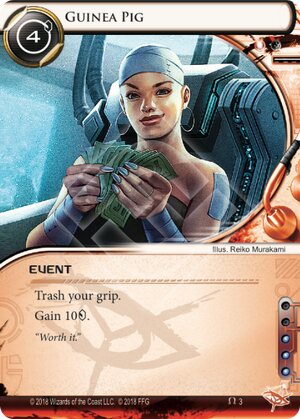 "Worth it."
Illustrated by Reiko Murakami
Decklists with this card

Guinea Pig is a very straightforward economy card, that nonetheless isn't playable in most decks.

The economy aspect of the card is easy to understand: pretty much every Netrunner player knows how powerful Sure Gamble is, and the credit effect is a substantially better Sure Gamble (instead of paying 5 to gain 9, you're paying 4 to gain 10, a strict upgrade on both halves of the card). If you can live with the downside, you can get a lot of gain from a card like this.

However, in order to play Guinea Pig and gain that sort of absurd economic boost, you need to trash the rest of your grip. So playing this card is all about building your deck to minimize the downsides. Downsides plural, because there are two of them:

Guinea Pig is therefore unusual in that it's one of the least synergistic cards in Netrunner. Normally in my reviews, I think about "what support does this card need to make it playable?". Given the strength of its upside half, Guinea Pig is sort-of the opposite: it doesn't need support, so much as it needs to avoid anti-synergies, and it anti-synergises with almost everything. So you aren't looking at what makes it playable, but rather at what doesn't make it unplayable. (It used to have a notable synergy with Bookmark, but Bookmark has rotated, and it wasn't a very strong combination anyway.)

My best results with Guinea Pig have been in a deck that's almost entirely resources, hardware, and conspiracy breakers, with lots of redundancy. The idea is to operate on very few cards in hand, installing everything as it's drawn except for redundant copies of cards that you don't need. A construction like this can give you a very strong economy, but at the cost of taking a while to get started.

It's also worth noting that Guinea Pig isn't the only card that anti-synergises with situational cards or cards that you'll need later but that get stuck in your hand: pretty much any other self-damaging card has the same issue. As a result, Guinea Pig works quite well alongside cards like Zer0: if you have the sort of deck which Guinea Pig is playable in, then Zer0's downside will also be smaller than usual.

In conclusion: there's obviously power in Guinea Pig, so it's initially a little surprising that it isn't played more. However, the downside really hurts it, limiting what decks it can go into. In particular, decks where Guinea Pig works tend to be slow to initially set up (because this is the main downside of resource economies); and they also tend to be slow to react to what the Corp does (because they can't hold situational cards like Inside Job in hand). Given how fast the metagame is at the moment, and how often the Corp will try to get away with scoring in a dubious scoring window (thus forcing the Runner to react), its relative unpopularity therefore shouldn't be all that surprising after all; the sort of deck that wants to play Guinea Pig will suffer from having a bad matchup against more or less everything that's popular, which is not a good place to be. That said, there's definite potential here: I can easily imagine Guinea Pig becoming a very strong card if the metagame ends up getting a bit slower and giving resource economies their time to shine.

It feels like (and must be, taking into account the set it was released in) the pet card of Gnat. I tried a deck using other cards supporting this ID, like The Noble Path and Respirocytes, which I never used before. And as you say Bookmark can come in handy here. Maybe with Severnius Stim Implant? Doesn't feel really viable in the end but was fun to try once!