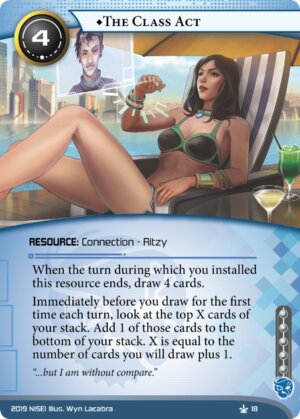 When your discard phase ends, if you installed this resource this turn, draw 4 cards.

interrupt → The first time each turn you would draw any number of cards, increase the number of cards you will draw by 1. When you draw those cards, if you drew at least 2, add 1 of them to the bottom of your stack.

"...but I am without compare."
Illustrated by Wyn Lacabra
Decklists with this card

So, this card has some similarities to Mr. Li, which never saw any play, and this is more expensive. So why do I think The Class Act will be way more popular in criminal decks?

First off, the math is just way more favorable for this new connection. Mr Li has a total cost of 5 (3 credits, click to install and the card itself), while TCA only has a cost of 2 (4 credits + 1 card + 1 click - the 4 cards you draw). This is significantly better, and getting to start your next turn like Andromeda gives you a ton of tempo. Remember, since this triggers at the end of your turn, after hand size is checked, you don't discard the cards.

Furthermore, TCA is way more versatile than Mr Li. The latter only gave you one line of play: spend a click to look at 2 cards, and draw the one you need. The former works with ALL draw engines. Earthrise Hotel, Deuces Wild, Diesel, Build Script, the newly spoiled blue Diesel, all of them will trigger TCA and allow you to draw even more efficiently.

The only disadvantage TCA has is that it only triggers the first time you draw, while Mr Li could be used as often as you'd like. But I consider this a very minor minus.

At 5 influence, this will not see any out-of-faction use, except maybe in Sunny. But expect it out of many criminals!

The Class Act has an interesting interraction with an old and hitherto virtually useless piece of Criminal hardware: Window.

When you click Window for the first draw of your turn with Class Act in play, you look at the top two cards of your stack and put one on the bottom, which you then draw. This is different to a normal click to draw with Class Act because you now know the top card of your stack!

Unfortunately the maths does not work out for combining these two cards with Oracle May. For you draw two cards and gain 2. You could have done this clicking Professional Contacts twice and saved yourself having to assemble a three card combo. On top of that, knowing the top card of your stack in Criminal is as easy as making a successful run.

Bit of a useless interraction in the end, but one that I thought was neat enough to be worth mentioning.

(Downfall era)
Trinity_ 30
I don't think the Oracle May interaction you mention works, as both Oracle May and Window are click abilities, so you can't combine a Window draw with Oracle May's ability. Oracle May and Paragon on the other hand... — manicmoleman 3 May 2019
I think the idea is use your Window + Class Act combo first click to see 2 cards and then draw the bottomed card while you now know the top card of your stack. Then to use Oracle May to draw the card you know. As mentioned in the review, it's a combo that could be easily replicated just by using ProCo. — BlackCherries 3 May 2019

Skipping the Window and using Paragon instead is amazing.

Run and see what the top card is. Use Oracle May and auto succeed the name. Then look at the card you named and the next card after that, take either one of those to your hand and then gain 2.

As far as 3 card combos go, you could do a lot worse. You get an access, 3 credits, and your choice of 2 cards for 2 clicks

The best part about it is that all 3 cards are good by themselves (as long as you lean heavily in one direction for Oracle May).