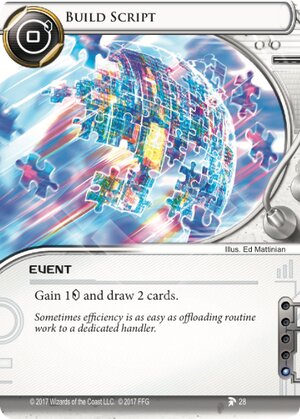 Sometimes efficiency is as easy as offloading routine work to a dedicated handler.
Illustrated by Ed Mattinian
Decklists with this card

This will be short, but this card deserves another review.

People who call it bad are, I think, looking at it from a wrong perspective. Build Script is not a card - it is deckbuilding WD40. Any deck it is dropped into will run a bit smoother and more efficiently, as if it was well-greased. It is a deck-thinning card - you draw into it, and it replaces itself in the most efficient way possible. For a click, you gain a credit and two cards - it is like three less-than-desirable basic-action clicks rolled into one. It is really great! It is not a draw engine - it is not there so that you can fish for that one card you need - but it is a tool to, in general, draw into stuff you need to draw into faster and at a lesser overall cost. A 45 runner deck with 3 of those is like a 42 card one.

Sure, deck-thinning of this sort is worse in Netrunner than in many other card games, because you are still losing a click, which means that it is not entirely frictionless - but about as frictionless as it can get in this game. And this handles really well in play - makes your deck that much more consistent, because as long as you have it in hand, you always (0 cost) have a better alternative to those annoying "I need to click for a card/credit" moments.

And that warrants an influence cost. Would this card be too good if it did not have influence cost? Yeah, kinda - because it would not have any cost associated with it. It would literally fit in any deck that does not absolutely need all the card slots it can muster, and would make it that single bit more efficient. So, just like Deuces Wild or Process Automation it needs the influence cost, so that including it in a deck is a tradeoff. And yeah, that makes it not fit very well in many lists, which are already short on influence. That's fine. But for any deck that goes "I need to draw into cards X, Y and Z as frictionlessly as possible", this card is worthy of consideration. It makes them run just that one bit smoother. And that is always a worthy goal.

(Terminal Directive Cards era)
Gargulec 459
In Criminal I'd prefer Exclusive Party. I would never play Diesel outside of Shaper, but I see your point. If it cost no influence then it would be better than Diesel outside of Shaper (I often find 3 cards a bit much, 2 and a credit is a lot more versatile). OTOH, Process automation shouldn't cost an influence, because it is worse than this and Deuces. — CascadeHush 3 May 2017
Sunny loves this card. — FreqKing 5 May 2017
2

So far I have come up with two uses for this card. For one, it is suited for a runner teaching deck. It does what the runner should do and is straightforward to use. It encourages things you should be doing with your time anyways: drawing into your key cards and also getting money to pay for them. Another good contender for this is Diesel which has the problem that the runner might find themselves lacking enough money to pay for their cards, requiring to plan the turn while also learning the basic rules of the game. Deuces Wild seems too complicated for a first game where everything is new and the choices can be overwhelming.

A second use for it is in Draft cubes. It enables the creator to weaken the runner side by swapping some copies of Deuces Wild for Build Script. Thus, it's nice to have a tool to balance the cube.

Sadly that's about it, the one influence seems like a mistake and even without it, I can't think of any reason to include this in any serious constructed deck.

(Station One era)
Capstone 41
Third use: an example of how to value cards. On the face of it it's worth 2 clicks (otherwise spent clicking for cards or clicking for credits) but the value of the deckslot and influence (and associated opportunity cost) matter as well. — Silv 5 Apr 2017
I can somehow see how you would get to one influence by comparing it to Diesel and Easy Mark, but those fill specific roles such as *Draw a lot* or *Gain credits*. Build Script is neither and, as you mentioned, probably not worth the deckslot. — Capstone 6 Apr 2017
2

Has anyone figured out why this card exists and why it costs one influence? As it stands, it has a similar effect to Deuces Wild. Typically people play DW and net 1 and draw two cards. But DW can be used for other things. Save 2 (or more) s by removing a tag. Or make sure you can get into that juicy server before committing to the run. More importantly, (at least for a little bit longer) you can make DW better with Prepaid VoicePAD. No such possibility with Build Script though.

If it was influence free, I might include a couple in a Criminal deck to help with draw. But because of the influence, I doubt I'll ever play it.

EDIT: So I realized that this card would be decent in a Comet deck. Not amazing, but decent. If you can make room for it influence wise.

(Station One era)
quailman2101 265
I'm not even sure it'd help much with draw. It saves you a click but it takes up a card slot, probably multiple if you want to have it on hand when you need it. And the 1 influence makes it indeed a non-starter. — Silv 26 Mar 2017
It's usable from 0 credits is the main reason, so it can be used when you're broke. — LordRandomness 26 Mar 2017
1

First of all, this is a good card.

This card, more than most others, probably does a good job teaching people how they should be building decks. Focused, with fewer nice to haves taking up deck space.

What I like most about this card is that it forces you to be disciplined. IMHO, people should be trying to fit this in their stack. Not because it does something broken, but because it makes everything else you are doing more consistent.

This card forces you to focus on specific core concepts, which I think is good. By taking 3 influence from you and 3 deck slots from you, it helps ensure that you are only putting the best of the best cards in all the other slots.