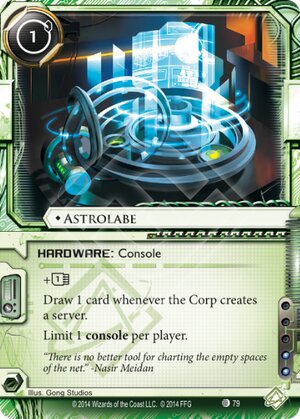 Draw 1 card whenever the Corp creates a server.

"There is no better tool for charting the empty spaces of the net." -Nasir Meidan
Illustrated by Gong Studios
Decklists with this card

I realize that I should be comparing this card to other consoles. But since my current runner deck wasn't actually running a console at the time this card came out, I found myself comparing it to Akamatsu Mem Chip instead. If you aren't running another console, and all you really need is a single point of memory boost, no other card does it better. Yes, the draw ability is fantastic against corporations that play very "sideways" like NEH, and just okay against other corporations. But if you're using it as a replacement for a single Akamatsu, even getting one draw out of this card makes it better.

At the end of the day, I guess what I'm saying is that it's pretty hard to beat a card that gives you 1 memory and another bonus for only 1 credit. This will be my console for a little while.

Something often overlooked by runners is that because Astrolabe's card draw is mandatory, it can be abused by the Corp at (in)opportune times. Wait until the runner ends their turn with a full hand and 0-1 s, and then just start spamming remotes (you might even go bold and throw down a naked agenda). This puts the runner in a pretty nasty dilemma - they start their turn with 8 cards in hand and no money. If they don't want to trash those shiny new cards, they need to play them, but if they want to play them, they need to get credits back first...and what about those remotes?? There's 3 of them they need to check!

(The Universe of Tomorrow era)
Bigguyforyou518 1705
Let's not forget Personal Workshop, shall we? — catch8088 9 Sep 2015
Also a funny little jank is that every card that the runner gains from Astrolabe also feeds Sweeps Week. It could give you a few extra creds, for whatever that's worth. — Crauseon 9 Sep 2015
I managed a 'dream' play against someone running Astrolabe in my horizontal NBN deck... I had two Turtlebacks rezzed, installed 2 new remotes, and played Sweeps. 4 from the Turtlebacks, 6 from the Sweeps, 2 new servers, and a free card. Great turn! — unitled 9 Sep 2015