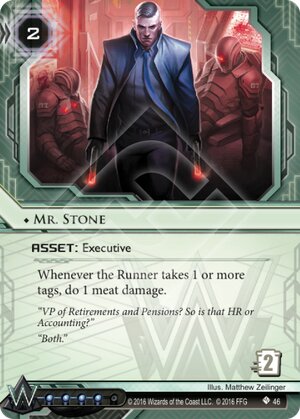 Whenever the Runner takes 1 or more tags, do 1 meat damage.

"VP of Retirements and Pensions? So is that HR or Accounting?"
"Both."
Illustrated by Matt Zeilinger
Decklists with this card

He wears a tie. Wields two guns that are almost melting with heat. These two poor guys in the background were clad in plascrete armor. AND HE STILL MANAGES TO LOOK BORED. Yeah - some of you guys might have heard this card is FFG's tribute to a certain Damon. Far as I know, these notions are false - Damon's full name was Mr. Damon Stone, not Mr. Motherf*cking Stone. The last name must be a complete coincidence.

Curiously enough, these two pistols are probably laser/blaster-based (only these are prone to overheating that much), which disqualifies them as Skorpios or Argus-made - most patents for energy weapons belong to NEXT, a military division of Haas-Bioroid. Despite many flaws, it is also a weapon of choice of many ex-SXC (Space eXpeditionary Corps), which suggests the man in question probably had fought in the Lunar or Martian Insurrection, or maybe even both.

Mr. Stone might be a reference to Deadlands: The Weird West. One of the most prominent NPCs in this game was Stone, an old undead gunslinger so bad that even the demon keeping him alive was afraid of him. As a plot device, Stone was meant to track down and outright murder any player characters that somehow grew powerful enough to threaten the interests of manitou. Quite a coincidence, because this is exactly what our man does.

It has to be noted that Mr. Stone's ability triggers for each instance of the Runner being handed one or more tags. So, Midseason Replacements would deal one, not 23 million meat damage, Hard-Hitting News also one and Breaking News a total of one meat damage. That is not much, but let's think about it for a second.

The most times you are unable to land a successful kill it is because you are short one damage (yeah, I know, nowadays we'd rather make them go BOOM!, but listen to me). Mr. Stone is here to help: coincidentally, the most times you are about to kill somebody, you have to land a tag first - so it's an additional reward for something you were meaning to do anyways. Always a good thing.

The card art already suggested it, but laser pistols are a really good way to melt away these ugly Plascrete Carapaces - something Weyland lacked up to this point. Maybe it's time to get these Muresh Bodysuits instead? (Of course, how you manage to land these tags is a different thing entirely.)

NBN: Controlling the Message might be really happy with Stone's services, as you're not only tagging, but actively punishing the Runner for messing with your stuff - it's like green-yellow Hostile Infrastructure which also fires on some unbroken subroutines and certain events. An alleyway worth exploring further.

Argus Security: Protection Guaranteed might view Mr. Stone as additional countermeasures against Runners stealing your agendas. With the choice being "2 damage or a tag AND 1 damage", they are more likely to pick the former, even if they can spare clicks and credits to clear the tag later on. And since we're talking Weyland, Skorpios Defense Systems could see every tag as a way to remove something important, permanently. Aggressive or defensive? Your call - Stone's good with both hands.

Mr. Stone turns a Zealous Judge into a more expensive Private Security Force that is also a lot easier to get. Click people to death. Just like in Diablo. Maybe they'll drop items too.

With your new VP of Retirements and Pensions, Account Siphon hurts a lot - especially as an early tempo hit. So does Data Raven, now with an additional option to deal damage whenever you want - and if you manage to get 6 or 7 power counters on it, you're basically killing people with birds, Hitchcock style. Not unlike Chief Slee, except a lot less crude. Any tagging tracer ICE suddenly becomes a lot more annoying, especially early game. Ever wanted to kill someone with Salvage? Well, there you go, you crazy bastard!

K. P. Lynn deserves a notion. Setting it up in Weyland Consortium: Builder of Nations ensures - with a bit of proper management - that the Runner has to take two meat damage for each successful run.

Engage Door to Door, because it's always good to have a cookie and yet make them eat a cookie. And by "a cookie" I mean "a bullet".

Two to rez, two to trash. It is unlikely Stone ever becomes a priority target (it's not a key card, more of an additional advantage), so any protection at all will do as a deterrent to wrecking the sharp-dressed man's house. Four infulence is not cheap - but I'm positive that quite a number of NBN decks that rely on sticking loads of tags will consider him pips well spent.

See? It's just one card. Just one man that gives you so many new ways to hurt people, at the same time being elegant, professional and polite. It's a piece very well designed, easily one of my favourite things about Terminal Directive.

Flavor review: It's a card.

Mechanics review: I really like this guy. He combos with a lot of other good cards: Data Raven, Prisec, K. P. Lynn, Dedicated Response Team, Snare!, The Cleaners, Zealous Judge... The list goes on, but those are the viable ones that come to mind.

With BOOM! now being the only major killshot available to corps, he's not necessary as a "closer" for getting them in range. Rather, he's an annoying tax with the potential to become a win condition if you reach a critical mass of those cards. Score a Cleaners, and Prisec now does 4 meat which can be flexibly placed and stacked in any server. Snare alone will deal 5 damage! If the runner goes to trash him, a Data Raven in front and/or KP alongside will still ping them, which helps with his mediocre trash cost. All of these tag methods are hard for the runner to dodge, even if they know what they are, and it doesn't even matter if they clear tags.

A more janky, but not unreasonable tactic is to get him and a Zealous Judge rezzed during your turn, then mill the shit out of them like when Private Security Force still saw play. Most of the time it's hard to keep a Judge alive, but it is one more implement of scumbaggery in the toolbox.

One other note of appreciation - he's a beast in CTM, but wisely takes up their entire influence to run three, so for once Weyland gets to keep their own stuff. He fits decently in Argus or BoN, but I think I like him best in Gagarin due to all the assets and upgrades he supports.

Verdict: One Mr. Stone who won't ruin your game!