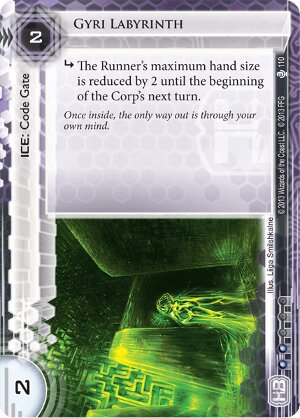 subroutine The Runner's maximum hand size is reduced by 2 until the beginning of the Corp's next turn.

Once inside, the only way out is through your own mind.
Illustrated by Liiga Smilshkalne
Decklists with this card

With the runner's grip at times representing mental capacity in Android Netrunner, Gyri Labyrinth represents an instance of low-cost ice that potentially taxes the runner's brain for a turn. Kind of a fun way of thinking of this cards effect whenever it hits the table.

Kill the runner: Much of the synergy Gyri Labyrinth's -2 hand-size goes along with additional ways of damaging the runner and hopefully cause a flatline event. Usually this represents a two-stage approach. 1st Stage is reducing the runner's grip during the run, the 2nd stage involves finishing the runner off usually during the Corp's turn after the runner has gone through his or her discard phase. Stage 1 "The Setup": Cybernetics Division: Humanity Upgraded is an example of an ID that could work here, putting the runner 1/5 of the way there from turn 1. Ryon Knight or really any other brain-damage inducing method could really work well here. Marcus Batty could allow the corp to fire a on Gyri Labyrinth, similarly rezzing a Chairman Hiro (probably on a different server) could add yet more downward pressure on the runner's grip. Stage Two "Follow-up" after forcing the runner to discard down to a dangerous level, the corp should now be in excellent position to finish the runner off... if the corp has the cards to do so. Jinteki Biotech: Life Imagined' s Brewery 2 net-damage might be enough. Punitive Counterstrike if say for example the runner stole a Priority Requisition for 3 meat damage may be enough, 2-3 copies of Neural EMP may work as well. Tag-based damage from sources like Scorched Earth or perhaps Private Security Force etc may be a bit trickier but still worth considering, of course the trick is getting tags on the runner, tag inducing methods like SEA Source are pretty common place, alternatively adding Data Raven, Hunter, Snare! to Stage 1 etc may do the trick too.

Preping for the kill Similar to inducing 2 brain-damage for a turn, Gyri Labyrinth in combo with other any number of finishing cards can be lethal, causing second-guessing for the runner.

Cheap: At only 2 to rez, Gyri Labyrinth a very accessible component to many kill-decks.

Easy: At only 2 strength, most decoders can make easy work of Gyri Labyrinth

Compensation: Cards such as Public Sympathy can represent a fairly simply way to throw off a Gyri Labyrinth-based strategy

Gyri Labyrinth fits well with HB's plethora of brain-damage inducing strategies. At two influence cost, Weyland and Jinteki can certainly make decent use as well. Most decks using Gyri Labyrinth also make use of Valley Grid to make sure it's hand-size limitation actually lands on the runner one way or another which of course adds to influence costs. For corps playing with kill-deck strategies in particular Gyri Labyrinth is worth at least a passing glance.

If you manage to lower the runners hand size down to a negative they die at end of their turn.