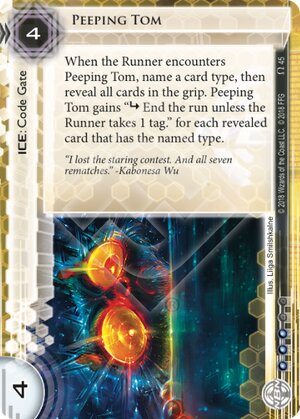 When the Runner encounters Peeping Tom, name a card type, then reveal all cards in the grip. Peeping Tom gains "subroutine End the run unless the Runner takes 1 tag." for each revealed card that has the named type for the remainder of this run.

"I lost the staring contest. And all seven rematches." -Kabonesa Wu
Illustrated by Liiga Smilshkalne
Decklists with this card

Seems FFG still didn't get the memo that Black Orchestra is omnipresent in the meta. I thought that after Sandman was welcomed with a collective 'eh', they learned that all the cool multisub code gates are strength 5+ nowadays. But now here is Peeping Tom anyway.

To be fair, this card is not nearly as bad as Sandman. First of, it costs 1 credit less while having 1 more strength, which is nice VS not-BO decoders. Also, it has end the run subroutines, always good to have on a code gate, meaning it is more like Authenticator. The issue is that, just like said ICE, the ETR is a lie. While often not advisable, the runner can always opt to take the tags and be on their merry way, if needed. For a runner going full tag me, this card is essentially porous.

And not only that, this card is entirely dependent on the runner's hand. While an educated guess can land you 2 or more subs if you know your opponent's deck, if you do happen to guess wrong at a bad time, this ice could end up being a blank 4-credit investment. At least it promotes remembering what is in your opponent's hand, a mechanic I have always enjoyed about card games.

Two additional pluses to end on a high note: it synergizes perfectly with Salem's Hospitality, so maybe play this in Harishchandra. And I would love to see someone use this ice against those Origami Wu decks, and have it end up with 10 subroutines. That would be hilarious.

(Reign and Reverie era)
Cpt_nice 1264
I think you are underselling this a little bit. Even a single card turns this into a Hortum, which is already widely played. It's also an in faction ETR Code Gate for NBN, of which they only had what, Tollbooth? It's fairly affordable, comes with a free Snoop, and HPT/Market Forces already took care of Tagme. — Handsome Jack 1 Jul 2018