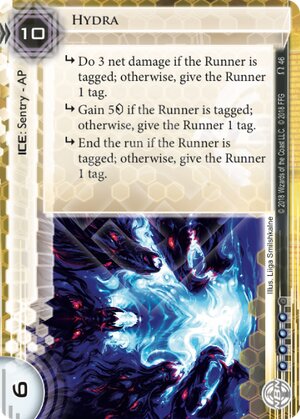 subroutine Do 3 net damage if the Runner is tagged; otherwise, give the Runner 1 tag.

subroutine Gain 5credit if the Runner is tagged; otherwise, give the Runner 1 tag.

subroutine End the run if the Runner is tagged; otherwise, give the Runner 1 tag.

When you think of sentries, especially high-investment ones, you think of monstrous pieces of ICE that could end games alone given the right situation. Each faction has or has had a sentry that is to be feared given the corp has enough credits to rez it: Archer, Janus 1.0, and especially the new Anansi. However, NBN has only had...Flare? Thoth? Both of which are only good if the trace is successful which means they can be 1) paid through or 2) broken with high-link.

While the beast doesn’t end games alone, with the right support, it can be absolutely devastating. If all of Hydra’s subs fire (with the help of cards like Data Raven, Bandwidth, Eavesdrop, or the new Acme Consulting ID) you can guarantee Snare! on a stick. Unlike the ambush though, you’re paying a net of 1 credit more for an ETR sub.

Let’s say the runner does have their killer out though, is that 10 credit investment worth it?

With almost every common killer requiring a minimum of 6 credits, Hydra is excellent as a big, taxing ICE and can really be considered as an alternative in decks that would normally run Tollbooth, Data Ward, etc. It also raises a big middle finger to Hunting Grounds which has generally been the bane of so many amazing NBN ICE like the two just mentioned.

However, every NBN player should ask themselves two questions before including Hydra in their deck:

1) Am I regularly able to afford the 10 credit rez cost? You’ll still need to pay the initial 10 even if you might get refunded.

2) Is a high-cost sentry, whose only punishment against runners being a tag and an unsuccessful run, worth it to my gameplan?

If you answered Yes to both questions, consider a x1 or x2 Hydra in your deck and drink up on those delicious runner tears.