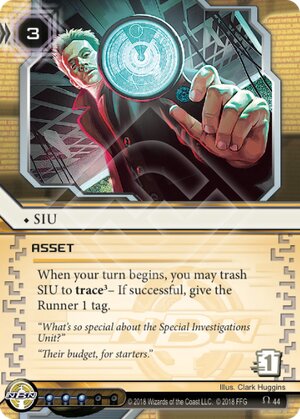 When your turn begins, you may trash SIU to trace [3]– If successful, give the Runner 1 tag.

"What's so special about the Special Investigations Unit?"
"Their budget, for starters."
Illustrated by Clark Huggins
Decklists with this card

This is one of those cards I just looked at when it got spoiled and went "... Christ, what were they thinking". And many others thought the same.

The act of tagging a runner has always been an interesting process. Text on corp tag cards varies wildly, but with very few exceptions (a Data Raven counter is the only one I can think off atm) they always require the runner to have initiated a run and/or to have dealt with an agenda. In that sense there has always been an interesting choice in runner vs tag corp matches. You can sit back safely and risk he corp scoring out, or you run knowing you could get tagged, with all the misery that entails.

SIU turns that dichotomy on its head by making waiting just as dangerous as running. If the trace is successful, the runner is tagged, runs be damned. The only restriction is having it survive on the board for a turn, which is easy to do unless the runner checks every card. A gargantuan and perilous task vs many asset spam decks, which is where this usually finds a home in. And after the runner is tagged, the corp has 3 clicks left to do nasty things with, not the usual 2 after they successfully fire SEA Source.

Sure, if the runner finds this in R&D or HQ it is trivial to trash. And yeah, the unfront credit cost is not totally insignificant. But the decks that use SIU (Gagarin and CTM come to mind) usually have no lack of funds. It is a win con on its own and one that forces runners to make unintelligent plays that go against what I think is fun about Netrunner.

I was happy when this card got restricted and I wouldn't be sad to see it go again.