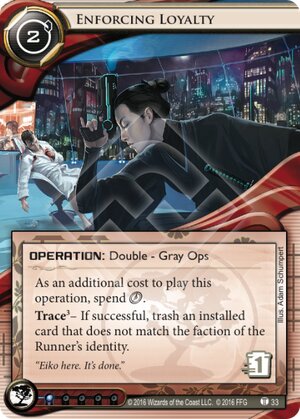 Trace [3]– If successful, trash an installed card that does not match the faction of the Runner's identity.

Enforcing Loyalty has a potentially potent effect. It can trash any out of faction card in the runner's rig, Anything! But is it a good card? There are several points against it:

-Because of it's play cost, it is basically a trace 1 card. That is horrendously bad! You can bump it up by 2 for free in NBN: Making News which is a little more doable. Primary Transmission Dish could help too, but you'll need to protect it. You have to consider too, that more and more runners are wisely running with link. That makes it even harder to land this card. So to use this, you'll either have to catch the runner when they are broke or spend a good amount of credits.

-It's a double which just makes it more of an investment to use.

-It has a trash cost! And an extremely low one. That's right, this is one of the new breed of operations that can be trashed when accessed. This makes it vulnerable to being sniped out of your hand or R&D before you are ready to use it.

-It only targets out of faction cards. This would include neutral cards and so each deck does have a decent number of targets, but still far less than half of their cards will be target-able. And you won't know until you sit down and start playing which ones.

Now if you do catch the runner with no credits, you may be able to take out a vital, perhaps non-replaceable, part of their rig. You might target:

-A criminals imported Corroder or Gordian Blade. They probably only have a couple and limited if any means of recursion.

-The console or other memory cards. This could be huge if they have a full rig, forcing them to immediately trash some programs. A Scheherazade or Leprechaun could have the same effect. Remember that any of these cards have to be out of faction though.

-Take out their Plascrete Carapace and then go for the kill.

As you can see, if you manage to pull it off, the effect can be devastating. Hence the many downsides to the card. It does only cost one influence so you can include all three of them in a deck easily enough. I think you could run a Midseason Replacements deck with Closed Accounts and a couple of these. Give em a bunch of tags, take all their money, then in the next couple turns take out parts of their rig. Of course if you pulled this off then you could probably just of Scorched Earth them.

(Blood Money era)
quailman2101 252
Not sure what you're saying about Paperclip, as it has recursion built-in. — Jeffrey Bosboom 20 Aug 2016
ha ha yeah, not used to that yet — quailman2101 21 Aug 2016
switched to gordian blade — quailman2101 21 Aug 2016
regarding "basically trace 1" - this is effectively identical to Midseasons and SEA Source. — Runaway 26 Aug 2016
True, but those cards are typically followed by game over. Enforced Loyalty is often just an inconvenience to the runner. — quailman2101 29 Aug 2016
It's not 'effectively a trace3'. It IS a trace 3. If you're the runner, you still look at this as a trace 3. — Thaddux 31 Aug 2016
Here's how I look at it: Say it was a zero cost trace 1. You'd think wow, that's pretty bad, I'll probably have to spend some real money to land this. This is actually worse than that. If it was a zero cost trace 1, and you happen to catch the runner with zero credits and no link, you could land this for free. If they have two credits, then you could boost it by two for a trace 3 and catch them again. You don't have that option with a two cost trace 3. As Runaway mentioned, this is actually common with trace operations (though you get a real bargain with Foxfire). Midseasons and Sea Source have a trace of only one more than their cost. But typically if you play those cards you follow it up with Scorched Earth for the win. In that case, any investment is worth it because you just won the game. — quailman2101 4 Sep 2016