Trace [5]– If successful, add an installed non-virtual card to the Runner's grip.

"SELL!! Buy platinum, but GET OUT OF THE TT CREDIT! It is TOXIC!"
NBN • Gary Bedell • Blood Money 34
All sets:
Links: Decklists | ANCUR 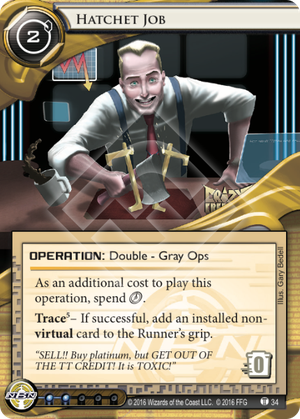 Initial inspection of Hatchet Job conjures thoughts of pushing back an expensive Runner card, such a Security Nexus or Femme Fatale back to hand, or an overloaded Medium, to knock back the Runner's tempo. The reality is the card is riddled with a number of flaws that hurts its viability and justification for a deck slot. A 2 Double Operation that depletes most of your turn to force a trace on the Runner, at a base of 5; with the most expensive install card likely to be Paperclip in today's meta. This is all while requiring the Trace being successful, and the Runner not trashing the card for free on access. Strong arguments could be made to follow this up with a Salem's Hospitality as a form of rig destruction, but that involves holding onto Hatchet Job until then and hoping it doesn't get trashed for nothing.

The card still feels too niche and too fragile for me to justify its inclusion, NBN have a plethora of better cards that could be included to do just as much damage as this card could. That 0 just hurts this so much.

(Escalation era)
Mechanoise 1570
Just hatchet job your own agendas in the runners grip. Best way to make sure they never access them. — Frogblast 30 Oct 2016
That's super funny @Frogblast. It should work based on the text. — quailman2101 14 Nov 2016
Unfortunately they then just overdraw, discard them into your archives, and run. — rymosrac 5 Jan 2017
Unless you do that after they have no more stack left to draw and use a deck which deals no damage to them that would help them getting rid of the agenda. If only LARLA wasn't in every deck :D — Krams 2 Mar 2017
Well with skorpios and salem's hospitality this is a really good in a rig shooter combo — Mufasa 14 Jul 2017