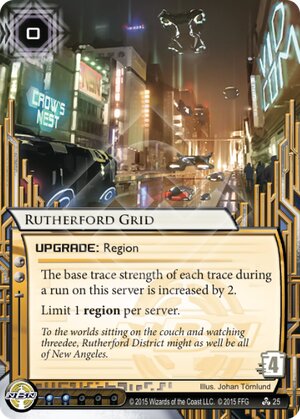 The base trace strength of each trace during a run on this server is increased by 2.

To the worlds sitting on the couch and watching threedee, Rutherford District might as well be all of New Angeles.
Illustrated by Johan Törnlund
Decklists with this card

Rutherford Grid is a very useful card for Tracer ICE/Trace based decks. The IDs that are best suited for this would be Making News, SYNC and NAS.

Rutherford does nothing by itself except take up deckspace, so to capitalise on it the Corp needs to threaten either punishing or profitable traces during runs on the installed server. The most useful ways to force traces are with Ash 2X3ZB9CY or Bernice Mai - Ash even has the benefit of protecting Rutherford Grid. There are also a few pieces of ICE that can force a trace 'on encounter': Information Overload and Troll. TMI forces a trace on rez and Rutherford can make it almost playable [in :Making News]. With Aryabhata Tech the corp gains 1 and runner loses 1 for every successful trace. Broadcast Square can also trigger off the rezzing of Illicit sub-type ICE giving the corp bad pub. Finally Manhunt can also function as a egregiously uneconomical version of Bernice.

The other big benefit benefit of Rutherford is that ICE with weak trace s are greatly boosted. This helps a lot with ICE like Caduceus, Dracō, Muckraker or Shinobi. All of the Zodiac ICE (Gemini, Sagittarius, Taurus and Virgo) will also benefit having a default trace strength of 4 instead of 2. In a lot of cases this means the runner will be forced to use their breakers to get through ICE, instead of just beating the traces. Cards with already decent or strong traces like Archangel, Assassin, Resistor, Viper or Waiver become even more painful to encounter. Where the runner has the right breakers it will just increase the taxing ability of the server - never a bad result, especially if you have Ash inside.

Sunny decks (especially with Rabbit Hole) and other linked runners (maybe using multiple Sports Hoppers can be a problem too. At least Rutherford works on Nexus traces so it may help the corp to contest a game-critical run.

One theme that you might have noticed reading this review is that to get 'good value' out of Rutherford Grid it needs to be installed on a server that the runner will want to run and that the server (and the corp deck) needs to contain a lot of trace cards and trace support cards. Whether these restrictions are a net plus or minus depend on the deckbuilding and piloting skills of the corp player. Rutherford Grid presents both a challenge and an opportunity for players interested in playing trace-based corp decks.

One last thing: Rutherford Grid is a Region so it can't be used to protect a SanSan scoring server.