Bounce rate is a well-understood measure of ice strength. But it is not the only measure.
Neutral • Andreas Zafiratos • Data and Destiny 28
All sets:
Links: Decklists | ANCUR 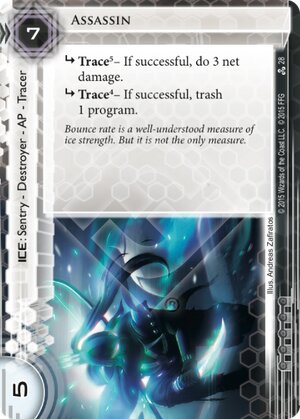 Say hello to your little friend.

This is what a true Sentry feels like, something powerful with subroutines you cannot allow to fire, and at 0 influence how could you not justify its inclusion? (Unless you intend on being a poor corp.) 7 rez cost to 5 strength is fair, and with two subroutines being a trace of 5 and 4 respectively, each with good effects, hell yes.

Trace dependency always comes at a cost, but their respective trace strengths will impose more of a tax to the Runner as opposed to a blanket effect. What gets overlooked with Tracer ICE is that it plays mind games with a Runner, forcing them to consider spending their money just to get through this one time, or even allowing the net damage trace to fire. Overall you're looking at a solid piece of ICE that Anarchs without Datasucker are going to loathe, especially as it'll take 4 cards with Faust to break. This is a serious inclusion to most decks that can support the costs and will see a lot of inclusions in the future.

(Data and Destiny era)
Mechanoise 1570
The runner REALLY doesn't want these traces to fire, because the net damage will hurt and the program trash will usually cripple. Because of this, it is a great tax. Its combined strength is higher than its rez cost, and against most runners it will be a horrid tax. — NobbyNobs 15 Jan 2016