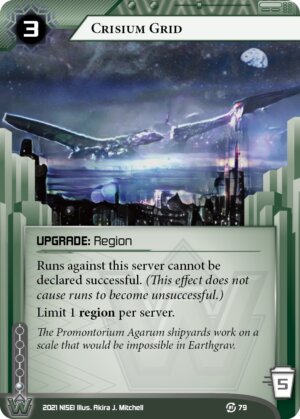 Runs against this server cannot be declared successful. (This effect does not cause runs to become unsuccessful.)

The Promontorium Agarum shipyards work on a scale that would be impossible in Earthgrav.
Illustrated by Akira J. Mitchell
Decklists with this card

Pros: - 1 influence is always a good thing - 5 trash cost too - Great boost against Criminal if installed on HQ, against Shaper if installed on R&D. Makes the Runner lose a lot of tempo. - With Tennin Institute: The Secrets Within as an ID, it favors the odds of placing advancement tokens each turn.

Many of them are heavily played.

(Up and Over era)
Him 276
Great review, but Neural EMP and Power Shutdown are both "Play only if the runner made a run during his or her last turn": Crisium Grid doesn't stop them. — JAK 16 Feb 2015
Hello, Yes I saw this the day after and have tried to edit the review multiple times but it always runs on error. — Him 21 Feb 2015
**Incorrect** about #neuralEMP ... Neural EMP doesn't care if the run is successful or unsuccessful, it will fire off as long as he made a run — Dydra 26 Feb 2015
I believe you are also mistaken about Demolition Run: CG has no affect on it since it doesn't require success. — jaydoggy 3 May 2015
One other correction - you can still play Successful Demonstration after an unsuccessful run on a Crisium server. The card only affects *successful* runs on that server. — hbarsquared 4 May 2015
You cannot play Successful Demonstration because Crisium Grid makes the run neither successful nor unsuccessful. That wording has a surprising number of effects. — TaliesinSkye 6 Apr 2016
There is no Anti synergy with Hokusai Grid since they are both Regions — thunderfist 11 Apr 2016
Does it still prevent those card effects if it is trashed in the same run? Cause it doesnt say so like other upgrades... — Vortilion 5 Jun 2019
Yes because the run becomes successful or unsuccessful at step 5e of a run while accessing and trashing are at step 5g. Crisium's effect is already applied by the time it is trashed compared to something like Red Herrings or Ben Musashi. — BlackCherries 5 Jun 2019
4

This is potentially a good counter to a lot of those Eater decks showing up and winning tournaments. The runner can't use Eater to break ice and still trash this. It is also nice that it's only 1 influence.

Question more than a review -- Does this work in synergy with Tennin institute identity. The statement "to be successful or Unsuccessful " indicates neither effect occurs?? Is there a FAQ on this one?

(Order and Chaos era)
Rookie Jr 26
@Rookie Jr; Tennin requires the runner to "make a successful run" to prevent Tennin ID ability from triggering. Since Crisium states "The run is not considered to be successful" (regardless of the second part), the runner would need to successfully run a non-Crisium server, or trash the Crisium and successfully run that server again to prevent the Tennin ID from firing. The "unsuccessful" clause is in there to prevent Crisium from triggering punitive effects on cards like Autoscripter, John Masanori, or Successful Demonstration. — Highwire 4 Feb 2015
Does this also screw sneakdoor runs? — JT 9 May 2017