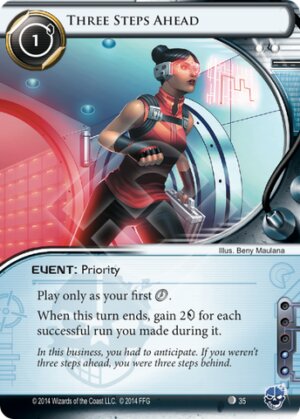 When this turn ends, gain 2credit for each successful run you made during it.

In this business, you had to anticipate. If you weren't three steps ahead, you were three steps behind.
Illustrated by Beny Maulana
Decklists with this card

Historically, criminal builds have run a fairly standard suite of programs and resources--programs like Datasucker and Yog.0 to make runs cheap, resources like John Masanori and Security Testing to spread ice thin, and a console like Desperado to aid in trashing resources. In these builds, runners typically make one to two accesses per turn, staying nearly credit-neutral. Cards are ranked based on their credit efficiency above all else, since the assumption is, with enough accesses, victory becomes inevitable.

Unfortunately, like most optimized machines, these decks have blind spots where they break down. Near-Earth Hub gives fast-advance decks one free draw, if they want it, and economic assets like Marked Accounts and PAD Campaign strain economies geared towards keeping their heads just above water. Glacier decks make keeping runs credit-neutral nearly impossible, with ice like Lotus Field and Kitsune hitting blind spots in the rig. Finally, agendas like NAPD Contract and The Future Perfect defend themselves, making an accessed agenda not necessarily a stolen agenda.

With this in mind, criminal builds are casting about for a new paradigm to latch on to--or, at least, solutions to new problems. The idea of getting more for successful runs, however, is still fertile soil for criminals to explore. After all, one of the newer criminal identities is Ken "Express" Tenma, whose love of run events is deep and far-reaching.

So consider Three Steps Ahead. On its face, it looks like three Security Testings, resolved sequentially. With three successful runs, it nets 5--one more than Sure Gamble. However, unlike Security Testing, it allows for accesses and other cards to replace accesses. If one of those runs was a Security Testing run, then it would net 7--though 5 would come at the end of the turn. With one Dirty Laundry, it would net 8--the same as a Day Job.

Gaining 8 in a turn with two event cards isn't that special. You could do the same with two Sure Gambles. But with a live Security Testing, that becomes 10. And with a Doppelgänger installed, it becomes 12. Or, with a Desperado instead, 13--spread out through various timing windows, of course. You could fairly say that only 5 come from Three Steps ahead, and say that taking a "money turn" isn't productive, but this minimizes the effects 5 for three successful runs can give to the game.

A deck that wants to maximize accesses will eventually run out of money. Three Steps Ahead gives money along with accesses--keeping the runner's window of opportunity open. A deck that plays powerful run events like Account Siphon or Indexing wants them to land, and Three Steps Ahead rewards that. Typically scoring plays cede momentum to the other side; Three Steps Ahead keeps that from happening.

This won't work with all decks. A deck built around Blackmail, Blackguard, or similar sniping runs will find this card useless. Shaper decks that force an RnD lock will scratch their heads with this, and Anarchs may find themselves locked out too often to call this an economy card. Decks with explosive potential--that is, the ability to quickly turn nothing into several successful runs--will find the most use for it, provided that they can get in to at least one useful server. However, with more corporations playing undefended assets (as of Dec. 2014,) this is pretty likely.

The two best cards to compare with Three Steps Ahead are Dirty Laundry and Grifter. Dirty Laundry, despite being the bane of new players hoping to trash SanSan City Grids, is a solid tempo card that combines an Easy Mark with obtaining new information. And Grifter, when given a chance to breathe, helps keep the runner's "scoring window" propped open. While cards like Bank Job and Security Testing both give money in exchange for accesses, they both replace those accesses, making them less suited to use when it's time to find agendas.

You may think I wrote this review mainly to abuse the new symbol. You would be right.

(The Source era)
hatman 173
Against the right deck type, this card is great. If you're playing against NEH then yeeea, free money; with the right support cards, a lot of free money. But if you're facing a glacier with no naked remotes and substantial ice on all servers including archives, then this card becomes dead weight. I don't ever see it played, probably for this reason. — quailman2101 10 Feb 2016