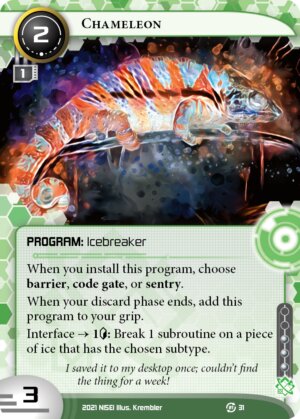 When you install this program, choose barrier, code gate, or sentry.

When your discard phase ends, add this program to your grip.

Interface > 1credit: Break 1 subroutine on a piece of ice that has the chosen subtype.

I saved it to my desktop once; couldn't find the thing for a week!
Illustrated by Krembler
Decklists with this card

I was looking forward to this card since it was spoiled in Draft Packs. And now while it's here, I am even more excited. First, it is the card I was looking for my Kit - decoder early on, pretty much anything I want later, when CyCy hits. Also, bonkers with Nasir (as an emergency breaker on PW) and Schoolgirl (Sahasrara, Scheherazade, London Library, LLDS... Take your pick).
Now it is not the main breaker for me, the same way as the Sage never was. But it is a tool to fill the gap when you lack proper tools. It excerts the same pressure on a Corp, especially rushing early agenda/MMC and enables relatively safe facechecks (vide Cortex, Katana, Komainu, etc).. That makes Chameleon a great Killer/Fracter - both of which are in short supply in Shaper's toolkit.

It breaks Turing, Swordsman, and Wraparound all in one program.

It's an excellent complement to an AI breaker, is what I'm saying. Shaper Overmind can make good use of it, especially since it can be employed early game before Overmind comes out, do some breaking, then vanish and stop eating up MU that your Overmind will need when you install it. Alpha/Omega builds find it nice, potentially breaking middle piece ICE, covering for the AI stoppers above, and doing work early game. And of course any build using the old standby of Atman for 4 conveniently has Chameleon to break all the stupid 3- ICE sitting around and D4v1d for the 5+ stuff, producing a {3-/4/5+} breaker suite instead of the usual {Decoder/Killer/Fracter}. Wacky!

In summary, by virtue of coming down early and knocking out all the AI stopper ICE, Chameleon is an invaluable tool for AI breaker decks that will both get you past AI stoppers and get you into servers before your AI is online.

(Data and Destiny era)
LordRandomness 228
Maybe I'm missing something, but this Chameleon has a hard time with both Wraparound and Turing, if the latter is on a remote. Since you aren't actually making Chamelon into a fractor, Wraparound still has its strength. — Tungsten 24 Jan 2016
...aaand I can't edit or delete this reivew. Oh well. D4v1d can break Turing on remotes and is a nice tool to have alongside AIs anyway to prevent the costs spiraling out of control (and Turing on centrals isn't necessarily out of the question), but yeah being unable to get through Wraparound makes this a hell of a lot worse than I thought it was. A lot of AI decks will just prefer to use regular secondary breakers over this. I really hate how I can't edit the review now, it might end up misleading people and it DEFINITELY makes me look like an idiot :/ — LordRandomness 25 Jan 2016
I use LLDS + London Library to turn Overmind and Chameleon into monsters. — LynxMegaCorp 25 Jan 2016
0

This is Chimera for the runner. 3 strength is nothing to scoff at, and if you pair it with an LLDS Processor, that's 4.

Just the small matter of having the credits to put this down every turn, and for the ICE to not be 2 deep. If you can solve one issue, you probably can't solve the other.

You can have a Sahasrara down to pay for this every turn, and you could also host it on Scheherazade every time as well, and make a bit money from installing it. At least that install click every turn isn't going to waste.

London Library is also a nice option as you would obviously trigger Chameleon to return to your hand before trashing all programs on London Library (Simultaneous effect rule: netrunnerdb.com.) This makes the install free, and not any more clicks that you'd use every turn to put it down.

The corp should mostly be stacking different types of ICE on servers anyway, but not always, double Eli 1.0 is common, and this still costs Chameleon 4 to break, but that's better than 2 credits and 2 Cerberus "Lady" H1 tokens in my opinion.

You could run 3x Knifed, Forked and Spooned and just trash one ICE at a time, which sounds fun, but probably not a viable strategy for winning, and those are 3 influence each, so you'd probably want to run that out of Anarch, but then this is 3 influence as well.

It's a good early game breaker, for sure, but without the economy to back it up, it struggles, and then it falls flat mid/late game when you don't want to be spending a click every turn to put down, a(n admittedly decent), 4 strength code gate breaker.

(The Underway era)
Fentonizer 313
Hmm... love the silverware deck idea. You could probably pull it off out of Anarch; 3x Chameleon and 3x London Library clocks in at exactly 15 influence. — KitsuAeryn 6 Jul 2015
Chameleon cant break Eli 1.0 its own. — tedhaha 7 Jul 2015
If you manage to get multiple LLDS then Chameleon is that much bettee — tsuruki23 9 Jul 2015