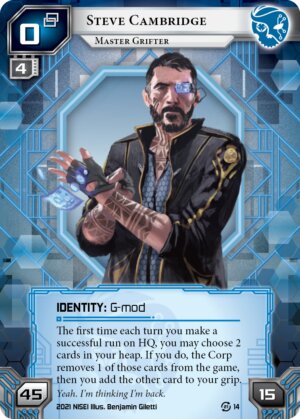 The first time each turn you make a successful run on HQ, you may choose 2 cards in your heap. If you do, the Corp removes 1 of those cards from the game, then you add the other card to your grip.

Yeah. I'm thinking I'm back.
Illustrated by Benjamin Giletti
Decklists with this card

A cool John Wick quote here? The art on the old card lookd a lot like Reeves in Matrix, while the new art looks like him in the John Wick series. Also, if I'm not mistaken Wick has a line that goes exactly "Yeah, I'm thinking I'm back"...