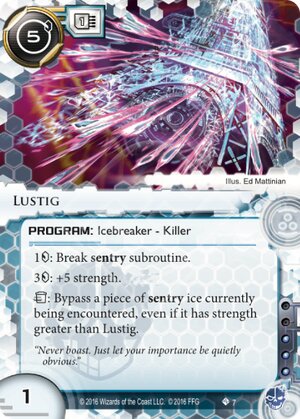 trash: Bypass the sentry you are encountering.

Part 2 of the "fraud breakers" flavor reviews. Starlight Crusade's review already referenced the nod to famous con artists, but I'll give just a little more information on Lustig, for those who, like me, love the flavor tie-ins.

Victor Lustig was famously known as "the man who sold the Eiffel Tower twice" (hence the artwork, a depiction of a cyber-space Eiffel Tower). Fluent in several languages, he began at an early age scamming passengers aboard ocean liners between France and New York. A more famous con of his involved "money-printing machines," whose function is as it sounds. However, when showing these to potential marks, he would make a show of complaining that the machine took 6 hours to print a $100 bill. Clients would buy these machines for exorbitant sums (possibly $30,000 or more), expecting to reap the benefits of printing money. However, after printing 2 bills, the machines would only produce blank paper. Of course, by the time clients discovered this, Lustig was long gone.

However, his namesake con, the Eiffel Tower, came to him in the 1920s, while France recovered from WW1. Lustig read a number of articles stating that the city was struggling to maintain the Eiffel Tower, resulting in it becoming somewhat run-down. Lustig recruited a forger to produce false government stationery for him and invited various scrap metal dealers to a secret meeting at a prestigious hotel. At the meeting, he introduced himself as the Deputy Director-General of the Ministry of Posts and Telegraphs, explaining the dealers were selected due to their positive reputations. He told those in attendance that the Eiffel Tower was too costly for the city, and they were seeking to sell it for scrap. However, due to the potential for public outcry, he said the project was top-secret until details were finalized. Lustig rented a limousine to take the men to the tower, using this time to gauge which would be ideal targets. He chose Andre Poisson, a dealer who experienced insecurities about not being high enough on the social ladder and believing the Eiffel Tower deal would boost his social status.

Poisson's wife was suspicious of the haste and secrecy, however, and to calm her worries, he made a false "confession," stating that part of the profits from the sale of the tower would supplement his income, as his governmental position didn't provide as much as he'd like. Ironically, assuming the role of a corrupt politician abated Poisson's concerns, as dealing with such individuals was commonplace. Thus, the sale was successful, and once Poisson realized he had been duped, he was too ashamed to go to police. Lustig's downfall was his return to the same scam. A mere month later, Lustig contacted new scrap dealers, almost completing another false sale. This time, however, the victim reported the fraud, and it was never finished, though Lustig escaped before being arrested.

In his later years, he even scammed Al Capone, convincing him to invest $50,000 in a stock deal, one that didn't actually exist. Lustig actually stored the money away, waiting until Capone grew impatient before returning it to him, claiming the deal had fallen through. Lustig also expressed disappointment because he "needed the money." Impressed by his "honesty" at actually returning his initial investment, Capone gave him $5,000 to "tide him over." He later partnered with a chemist to print counterfeit banknotes. This scam would be his last, however, as a jealous mistress eventually turned him in.

Finally, regarding the card's flavor text, it refers to the "Ten Commandments for Con Men," attributed to Lustig. They are as follows:

Be a patient listener (it is this, not fast talking, that gets a con man his coups).

Wait for the other person to reveal any political opinions, then agree with them.

Let the other person reveal religious views, then have the same ones.

Hint at sex talk, but don't follow it up unless the other person shows a strong interest.

Never discuss illness, unless some special concern is shown.

Never pry into a person's personal circumstances (they'll tell you all eventually).

Consider that 1 a down payment on the trash ability. As with all conman breakers it's powerful but not something you want to use often, especially when Skorpios Defense Systems: Persuasive Power is around. If you need to make a last ditch run however it's extremely useful.

Is Lustig better than Ninja? It depends on whether you would actually trash it, if you think that ability could come in handy the 1 extra cost should be worth it.

EDIT: @Krams pointed out in the comments that there are popular 1 strength sentries. That list is at the moment (Cobra, Errand Boy, Komainu, Shadow, Zed 1.0).

According to knowthemeta Cobra is indeed surprisingly popular at 20% currently. Komainu is around 8%. The others aren't played enough for proper statistical analysis.

So assuming you encounter Cobra in 1 out of 5 of your matches, assuming if you don't play Lustig you play Ninja, you need to pass the ice 3 times and nothing else matters you would need to pay 9 in boosting in total for those 5 matches (since only 1 match with 3 runs requires a boost) whereas you'd pay 5 for those five matches for Lustig. That's a pretty strong argument in favor of Lustig.

(Terminal Directive Cards era)
Silv 340
Strength 6 sentries might not be that common, but strength 1 breakers like Kommainu and Cobra are. I think the 1 base strength goes a long was there, since you wouldn't want to spend 5c for breaking all subs on a Cobra that's been rezzed for 4c if another breaker can do it for 2c... (or 1, if you use Mongoose) — Krams 10 May 2017
Good point. I've edited the article to reflect this. Thanks. — Silv 10 May 2017
Hey, a review that actually matters. Why is this on the bottom? — NoSoup4you 6 Oct 2017
2

This quote is from the actual Victor Lustig: en.wikipedia.org

All three of the Terminal Directive criminal breakers are named after actual con artists. Abagnale is the boy from "Catch Me If you Can," (hence the plane) and Demara was an interesting story as well, although I have no idea how the art was inspired.

To all the confused players trying to figure bypass abilities out : The bypass effect on this card DOES NOT prevent "on encounter" abilities from firing (eg Data Raven, Toll Booth). This is due to the text "currently being encountered" on the card, making it's bypass weak compared to say Inside Job. In order for the ice to "currently be encountered" the "on encounter" effects will have already fired.

Logic Bomb works this way too.