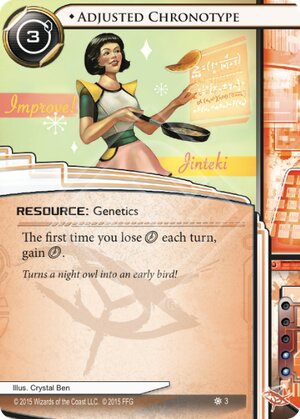 The first time each turn you lose click except by paying the trigger cost of a paid ability, gain click.

Turns a night owl into an early bird!
Illustrated by Crystal Ben
Decklists with this card

One thing people are missing is that this works with stuff like enigma and hourglass. Minor added value to an already pretty good card. Noise wyldside (which I never cut) loves it. I've added 2 to my Noise and its amazing. The cost is a touch high, but it leaves room for expansion. 2 splash is interesting, but probably necessary. I'm testing it in all kinds of decks. 4/5.

I have no idea if it will actually be viable. Neither this nor crusade are connections, so they can't be tutored. But just imagine this turn: Lucky Find, Lucky Find, Queens Gambit, Power Nap. 24 credit swing in one turn. There is no flaw in this plan. NONE.

(Order and Chaos era)
mrdudesir 629
Makes hard at work work too. — chrispedersen 31 Mar 2015
Does spending a click for a double actually count as losing that click though? — dijidori 31 Mar 2015
No, but this card will give back the lost click from starlight itself — Lttlefoot 31 Mar 2015
I don't think this will create a successful deck. But I, like you, am going to try it anyway :P — KitsuAeryn 31 Mar 2015
I just like that this card enables either a faux-Voicepad deck or it makes hard at work reasonable (not GREAT but reasonable, especially beside Data Folding). — Myriad 3 Apr 2015
This with Wyldside and Maxx will let make you a machine of card drawing. Draw two for Wyldside and gain a click, discard two for Maxx and draw a card. I'm not sure if Hard at work will cut it. The investment is 7 credits for 2 every turn, that'll be 4 turns after the one you installed it on to start gaining anything. But Wyldside, to me, seems like the perfect combination with this. — tendermovement 9 Apr 2015
Re: Wyldside and Maxx, remember you can choose the order of your own "At the start of your turn", making Test Run viable for tutoring again. — HilariousCow 20 Sep 2015
3

Adjusted Chronotype is a niche card, for certain. But the niche it occupies is incredibly interesting.

There seem to be two reasonable paths to success:

The truly extreme versions will combine this with Gene Conditioning Shoppe, and play multiples of those cards. Arguably, that makes the combos more consistent - if you're playing 3 AC, 3 Wyldside, 3 Qianju, 3 H@W and 3 GCS, you can start the combo off easier because 1/3 of your deck is part of it.

It's hard to say if this is another card that looks amazing, but ends up just being average, or whether AC+Wyldside is the new core of a consistent draw engine.

If there were 3-cost resource that said "You gain each turn", everyone would be playing it. It would be like Rachel Beckman for less than half the install and without the pesky tag restriction. It would be amazing.

Second, it needs support. You have to be playing at least one of these cards: Hard at Work, Starlight Crusade Funding, Qianju PT, Beach Party, or Wyldside. (Technically, ICE like Enigma or Hourglass count as well but you won't build your deck around those.)

Some of these cards (Qianju PT, Wyldside) are worth playing on their own. But others, like SCF or Hard at Work are not.

What happens if you draw Hard at Work before you find your Chronotype? Is it worth installing? Maybe, maybe not. But what if you find your Chronotype first? Then it does absolutely nothing until you find the other part. How long you have to wait is a question of both how much you draw, and how many copies you have of each...but, adding in more copies means dead draws (unless you're also using Paige Piper from this data pack).

Now, you could go all in on this, and through in a few copies of Gene Conditioning Shoppe to be able to play two lose-a-click effects at the same time, but then you'll probably want to be running other genetics to maximize your return on the 'shoppe, and with only a few genetics out right now that might not be worth it.

(The Valley era)
tiedyedvortex 4712
I was about to make a comment and point out that you were wrong about it not letting you click through Janus, then I re-read Enigma and Hourglass and compared that to Chronotype's text, and you actually have a great point. This card (despite what I originally thought) doesn't help you against Bioroids. I think it still fills a nice cozy niche for double decks, but Chronotype obviously isn't going to be a staple that shakes up the meta wildly. Not every card has to be I guess :) — FemurLemur 14 Dec 2015
Hello from the Faust+Wyldside+Cronotype meta. HAHAHAHAHAHAHA! — BoomFrog 11 Mar 2016
The meta be ded naw. faust = 3 influence for anarch RIP — RKruler14 16 May 2017
Eh, the first problem isn't that bad. Unfrotuantly the keyword lose is lose a click not spend... I wish if was "anytime you lose a click or a click is an additional cost" since some cards have "as an additional cost" — Personal Snare Iris 25 Sep 2019