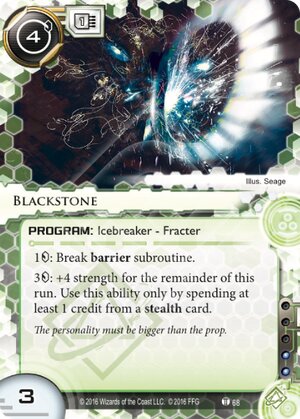 3credit: +4 strength for the remainder of this run. Use this ability only by spending at least 1 credit from a stealth card.

The personality must be bigger than the prop.
Illustrated by Seage
Decklists with this card

22/38 barriers this is better in terms of just strength efficiency than BlacKat. It's usually more efficient than BlacKat at taking down 3 or less strength ice due to them having a low amount of subroutines (except for ice such as Hive). For 6-7 strength ice, even considering the +4 strength for a total of 7 strength will overlap by 1 on the 6 strength ice, it is still better.

Now for subroutine breaking. I think the consensus is that stealth credits are worth more than 1 normal credit. Around 2-3 credits is what people usually say, but there are times where stealth would have not been used for the turn anyway and they would have just been useless, so that's something to consider in their value. After looking and trying to calculate which is more efficient at subroutine breaking, I gave up almost immediately and just reached the conclusion that it depends and it's a much of a muchness. They are both good and both are competitive with each other, which is great. There are always going to be scenarios where one is more efficient than the other. Although, it is worth nothing that BlacKat is more efficient relatively speaking than Blackstone when breaking ice at 4-5 strength and also weaker ice where they have quite a few subroutines, like Hive as I said earlier. On the other hand, Blackstone is better at almost everything else. Blackstone also keeps it strength for the remainder of the run. And on top of that, Blackstone also only requires 1-2 stealth credits max where BlacKat usually requires a lot more. That is an extremely important thing to consider.

I think the people saying how inefficient and bad this card is are just looking at it from a Corroder and Cerberus "Lady" H1 point of view, and not from a stealth or BlacKat point of view. Blackstone is a great stealth barrier breaker in it's own right. I think this has no competition in any shaper stealth deck, as it is in faction and there's no need to pay a hefty 3 influence for BlacKat like before. That can free up room for many things such as Datasucker to make Blackstone be able to efficiently destroy any of the strongest ice barriers or even the weaker 4-5 strength barriers without having to spend money for strength, or you can add extra things like Silencer, Dyson Mem Chip or whatever your heart desires. That influence is really important and powerful for stealth especially.

Along with Dagger, Refractor and even Dai V, there's little reason for most Shapers to go out of faction for stealth icebreakers.

(Intervention era)
Harctor 15
Tour Guide is a sentry. Hive is a better example. — LynxMegaCorp 4 Dec 2016
Thanks mate. I got lazy. — Harctor 4 Dec 2016
Some limited testing led to me including Net-Ready Eyes for support. Helps dramatically against Eli and Data Ward. NRE was also good for Refractor (DNA/Arch/Crick) and Dagger (Archer/Sherlock 2/Gutenberg). — PureFlight 4 Dec 2016
Agree with NRE! Makes a huge difference for some of the most common mid-range barriers, as well as some common targets for other breakers being used in stealth Shaper rigs. If you run Houdini and Switchblade, you really only need the +1 on Blackstone, so you could consider The Personal Touch if you prefer to avoid damage or Best Defense. — rwknoll 5 Dec 2016
8

Rather than comparing Blackstone to the other stealth fracter BlacKat, lets compare this to the gold and platinum standard fracters, Corroder and Paperclip, for the barriers you might expect to see.

So, Blackstone performs pretty reasonably, but falls flat on it's face against Eli 1.0.

Blackstone, though not really breaking any records, is a totally playable fracter for Smoke, especially if the saved influence gets you another Temüjin, some Employee Strikes, or something else useful.

It is also worth noting that adding Datasucker support also rounds out many of Blackstone's problems, and the strength for the run effect could potentially save you a few credits.

Though Blackstone would not be my first pick, you should probably consider it as an option, even if you do need to make a couple changes to make it worthwhile.

TL;DR: Blackstone is an ok fracter and can be good if you have Datasuckers, but it's not a stealth-tier breaker like Dagger, Switchblade, and Refractor.

EDIT: looking at this card again, with some of the more important and common ice; particularly Vanilla, Eli, IP Block, and Chiyashi (everything else is largely irrelevant), Snowball, which is agreeably one of the worst available fracters, has similar break costs, being the same for Vanilla, Eli and IP Block, and only being 1 credit worse against Chiyashi.