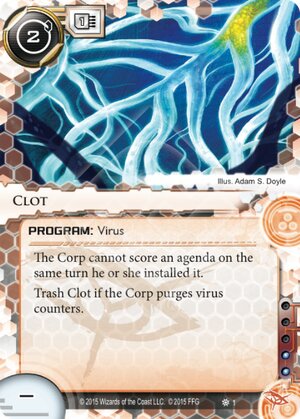 The Corp cannot score an agenda during the same turn they installed that agenda.

When the Corp purges virus counters, trash this program.

Hello, I am high up on the board of NBN and I have here a press release I would like to read.

"NBN is very concerned about this new breed of virus that threatens our totally legitimate business. We have a solid reputation with our AstroScript Pilot Program and our solid history of being the first to Break News to citizens. This new virus on the hacking scene is a solid detriment to the running of our business and we will do everything in our power to stop it... We'll get back to you on that one. In the mean time, we are encouraging all NBN staff and users to install the Cyberdex Virus Suite should they believe they are at risk."

There will be no futher comment at this time, and I will be taking no questions.

Just as Hades Shard alleviated my frustration with Jackson Howard, thereby dissolving my compulsion to smash any yellow-colored objects in my house and allowing me to get some sleep at night, Clot has come into my life to rain shit on tournament-obsessed fast advance nerds who should have never stopped playing Magic: the Gathering.

Has there ever been a better time to be an Anarch? Not since Self-modifying Code has one runner faction had it so great. Seriously. In the very first data pack since Order & Chaos flooded us with unfathomably fun and powerful cards, we get the one card in the game that actually forces SanSan-obsessed twinks to play Netrunner. I love this card so much that I have ordered 500 more packs of The Valley in the hopes of fashioning an orange tuxedo out Clot cards. I don't think it's hyperbolic to say this is the most vindicating moment of my entire life.

(The Valley era)
4dd150n 141
Playing clot as a singleton in shaper also looks great. With SMC or clone chip, it can hide from its own downside, and be tutored up after biotic install adv adv, or after install adv on a sansan. Beware you cannot do it after the last token, as the corp "reacts" first to his own click. — GammaCodeX 8 Apr 2015
As an anarch player and hater of all things FA, I obviously love this card. I am worried, however, that the only thing that will change is that the FA decks will include the Cyberex virus-trashing card. — KitsuAeryn 8 Apr 2015
@KitsuAeryn That is a very valid point. I don't worry about it too much as 1) virus purges aren't too devistating to my playing style and 2) most Noise decks run Clone Chip/Deja Vu anyway. — 4dd150n 9 Apr 2015
He rages at "Magic: The Gathering Nerds" who use competitive yet degenerate strategies to play a game that doesn't end up feeling like Netrunner, yet HE plays Noise Solitaire. LOL. This made my day, you get a "like" :^) — Bigguyforyou518 10 Apr 2015
I don't play Noise solitaire. Full suite of breakers, run about every 0.75 turns. Yup. — 4dd150n 10 Apr 2015
I will have to say that my initial impressions of Clot have been on the negative side - and this is coming from a player who has been a standing advocate of Anarch for a whole year, plays NBN but thinks Astro should be Limit 1 per deck, and cruises far past MTG in favor of VtES and A:NR. :) The need for this kind of a card is real, but it is not exaclty the best way to go with it. A FA NEH will laugh at the face of danger with Cyberdexes, and without a reliable tutor or splashed Clone Chips this might be just a waste of 2c. It's hard to find without tutors, should not be a three-of include, is dead against many other decks... Clot is strictly speaking not an Anarch card, but a Shaper card with an influence cost. :) Glad to see something not easily splashable in Criminal though. It's a card we needed, not deserved. A more reactive, universally playable card would've been better. Traffic Jam is in a better direction, as is The Source, but they are as clunky as Clot. Anyways, I hope time will prove me wrong, and until then there's nothing wrong in being excited about this card! — Crauseon 13 Apr 2015
Doesn't shipment from sansan pretty much negate clots ability? Install in new server, shipment, astro token, score.. — sodapopinski 13 May 2015
Still can't score it! Clot says no. You can load it up with as many advancement tokens as you like, but you're not allowed to score it even if you meet the agenda's advancement requirement. It just sits there being sad. — LordRandomness 6 Jun 2016
2

It's a virus. Noise and Djinn loves viruses.

Yeah, the Corp can purge it, but judging on how well you read your opponent, you can use Clone Chip to install it again and stop the incoming fast advance.

(Order and Chaos era)
mecha-nico 3
And if you're Noise, you can mill 'em while you do it. Love it, though it DOES incentivize the use of antiviral suites... — KitsuAeryn 2 Apr 2015
Plus it's a good addition to a Professor deck — Him 8 Apr 2015
oh man, f-ing clone chip! wow what insight there buddy! sick! in response to an install, advance, er hold it one sec. clone chip->Clot go! wow — rezwits 14 Apr 2015