The first time you install a card each turn (including Paige Piper), you may search your stack for any number of copies of that card and add them to your heap. Shuffle your stack.

"The Valley is littered with good ideas. You need the discipline to execute if you want to stay in my incubator."
Anarch • Wenjuinn Png • The Valley 2
All sets:
Links: Decklists | ANCUR 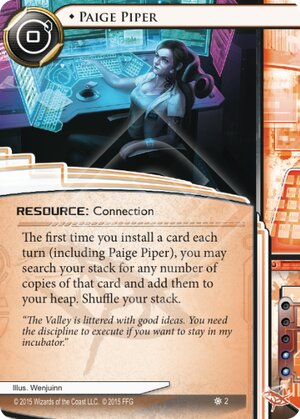 The more I think about this card, the more excited I get.

One of the key struggles in building a deck has always been with unique cards. Named characters and places (Kati Jones, John Masanori, Mr. Li, Aesop's Pawnshop) are always unique, as are all consoles, all of the new Genetics cards in this data pack, and a few other significant cards like Hivemind or Autoscripter. There are also pseudo-uniques, by which I mean cards that are not technically unique but provide no additional benefit after the first. You are allowed to play a second Professional Contacts or e3 Feedback Implants or Yog.0, but there is no point in doing so.

Unique cards typically provide a better return on their install cost than non-unique cards, because they have an extra invisible cost to balance it. This cost is dead draws.

If you are running more than one copy of a unique or psuedo-unique card in your deck, then sooner or later you will draw another copy. If you installed the first one, then the card may as well be blank. Your click is all but wasted--the only values of having a duplicate is to soak up damage and/or replace the first if it gets trashed.

This cost creates a tension in building your deck. The more copies you put in, the earlier you see it, but the greater the risk of dead draws.

Paige eliminates that. Put 3x Paige in a deck, and she'll remove the extra copies of herself. Add in 3x Kati and as soon as you find her, the rest get filtered out. Hell, just put in 3 copies of everything, and start churning through your deck like there's no tomorrow. Paige makes sure that every draw pays out. (This is especially useful in Valencia Estevez to work around that pesky 50-card limit.)

There is some risk, of course. If you lose your initial copy of an essential rig component, then you have to find your recursion or you're in trouble. A thin deck is also weaker protection against damage: if you use Paige to remove 10 cards from your deck, that's ten fewer cards to throw away on a Snare! or Fetal AI. But what's Anarch without a little risk?

You can also use Paige to locate cards you do want multiples of (Datasucker, for example) and then use recursion (like Déjà Vu) to bring them back, but if that's your plan then you should probably be playing MaxX instead. By the way, don't play Paige with MaxX: MaxX is already throwing two-thirds of your cards in the garbage, she doesn't need any help from Paige.

I think this card will really change the way players think about building decks, and that makes me very excited.

(Order and Chaos era)
tiedyedvortex 4608
I like that this card provides an alternative to (and a combo for) Djinn. I think I would have preferred to see it go to 3x Influence, but that's mostly because I feel like the Anarch toolbox gets cannibalized more than most. Looking forward to playing it. — KitsuAeryn 30 Mar 2015
In-faction, I believe Noise and Valencia runners will love Paige on their decks. Will definitely try it with Noise. — mecha-nico 31 Mar 2015
I just tried her out today in a Quetzal deck, which focused on 3x E3, Kati Jones and Djinn. And she delivered excellently. I practically bought the Valley mostly for Paige, not Clot or Traffic Jam. Even on paper she seemed like an excellent addition to Anarchs, who - as already stated - struggle with redundancy in copies, lack of tutoring effects and consistency in their draws. Ms. Piper is a new auto-include in my future Anarch decks that plan on building on unique cards or effects. — Crauseon 10 Apr 2015
6

Paige looks awesome on the paper, but you really need to want her effect badly for her to warrent a deck slot (or more often than not 3)

The ability can be seen as extra draws; whenever you draw what should have been a redundant copy of a card Paige replaces the dead draw with a gas draw. That is pretty good. But she only works after being installed herself. If you just throw her in a Quetzal deck with deep red(3x) The supplier(3x) herself(3x) and e3(3x) as the targets, you have 12 cards in a 45 card deck. Now the first of these cards you draw isn't necessarily Paige herself. On average she will be the like 3rd card (of the 12 of course). So there is a pretty big chance you only get to thin out 4 cards (the extra copies of herself plus one other card) Now the pay off isn't even immediately after installing a card with her, only when you are about to draw that card. if you thin out 4 cards in a 45 card deck there is a pretty big chance you get to see almost all the 41 others, so I will allow that you save about 4-6 clicks over the course of the game with Paige. Is that worth a slot? Remember you also need to draw Paige herself and install her, 2 clicks with no real impact on the table so the net gain is more like 2-4. Sure that's more work than some other economy cards like sure gamble, diesel, daily casts etc., but these cards pay off a LOT faster. We are talking about gaining about 3 clicks during the course of an entire game here.

What I am trying to say is not that this is a bad card. Not at all. But I think its one of those cards that you really can only throw in very few decks, build around having this type of effect. Just 3 other cards that you want to thin is not that kind of deck. Having a LOT of unique, and/or ways to recur the thinned out cards is required.

Valencia has been mentioned as an ID that wants this card more, but do remember that the 50 slots also means you find Paige later. Don't assume you start with her in play. (the same applies; you need a lot of unique for this to be worth a slot)

(The Valley era)
GammaCodeX 56
This is an excellent point. Having tested Paige a bit after I wrote my review, I realized that being able to get Paige early enough is a significant challenge. Additionally, her ability only fires on the first time you install a card each turn, meaning it's a delayed payoff. — tiedyedvortex 8 Apr 2015
For Paige, Supplier and Kati Jones (in a 45/15 identity), a single splash of Hostage will do well for finding Paige first hand. And then again, there's always something else to do than installing those uniques on first turns. Draw a few times, install a Datasucker or something, or Hedge Fund, and you should most of the time find her within the first 12 or so cards at least. If not, you've already dug out the useful cards anyways. — Crauseon 10 Apr 2015
2

One of the main issues with Anarchs is there complete lack of Consistency, This stemmed from (Until Recently) a complete lack of Native draw cards and search cards. Unfortunately this is not the only issue with the faction, Anarchs while claiming to be all counteractive and aggressive actually play using alot of very intricate "Unique" rigs the resulting play style required that Anarchs play with many powerful cards that interacted with each other well but could only be benefited from with one copy, or we literally unique.

Paige Piper is the Answer to most(?) of these things.

Overall I think Paige Piper will be a very good addition to the Anarch faction and is well worth putting in a deck running many unique cards.

I like it in decks that feature things like duggar's, wyldside, aesops, essential consoles (deep red for instance), and heap recursion heavy decks, so mostly all anarchs. I can't see much splash except maybe Exile.

It's a little awkward though, adding cards to remove cards to improve consistency, but I think with the big corp slow down, this will work. It is super tough to hate board improving cards for 0 credits. 3.5/5

(The Valley era)
x3r0h0ur 8712
One of the main issues with Anarchs is there complete lack of Consitency, This stemmed from (Until Recently) a complete lack of Native draw cards and search cards. Unfortuantly this is not the only issue with the faction, Anarchs while claiming to be all counteractive and aggressive actually play using alot of very intricate "Unique" rigs the resulting play style required that anarchs play with many powerful cards that interacted with eachother well but could only be benefitted from with one copy, or we literall unique. — Dread Sovereign 12 Apr 2015
Ha just Ctrl+V'd my Review into the comment bar, so sorry. In all Honesty I think she will be good in decks with lots of "Unique" cards, or Valencia. However if anarch ever get a resource searcher this card will really lift off. — Dread Sovereign 12 Apr 2015
1

Paige thins your deck at a very low cost. There are decks that try to do similar things with Bazaar and Replicator to great success. The reason why you have not seen Paige do similar things is because it is looking for a very specific deck construction. You do not want to run Paige in a deck with Daily Casts, Armitage Codebusting and similar economy cards if your plan is to use a resource based economy.

The idea with Paige is that you are going to make up for anarchs lack of draw by thrashing your deck and finding your ideal rig as soon as possible. You need to define your end goal, like a board with Maw, Bhagat and The Turning Wheel. Essentially, Paige is how you can churn through your entire deck looking for this combination of cards.

The drawback to Paige is that you might not have a back-up of a card when it gets destroyed by the corp. You are inherently less safe through the use of Paige, but with some skill in evaluating which cards you may want to keep duplicates around for, this can be mitigated. The other drawback is that your deck will need to run three copies of the cards that matter to it. You will want to run three Bhagats, three The Turning Wheels, etc.

So here are some interesting combinations:

NetChip, Ramujan-reliant 550 BMI and Spy Camera can thin up to 5 cards with Paige Piper.

Frantic Coding has a strange interaction with paige. When frantic coding installs a card, you can trigger paige to look for copies to discard. This shuffles your deck where those 9 other cards are still located, meaning that you lose track of these and don't need to trash any of the 9 other cards. A very strange and mostly undesirable effect, considering that you want your toys in the heap when you are playing anarch. But hey, it could be useful in some circumstances. A free bonus is a still a bonus.