If the Runner loses or spends a click during a run on this server, he or she loses all credits in his or her credit pool.

"There are many advantages to having facilities on the moon. Less traffic, for example." -Director Hass
Haas-Bioroid • Henning Ludvigsen • The Spaces Between 23
All sets:
Links: Decklists | ANCUR 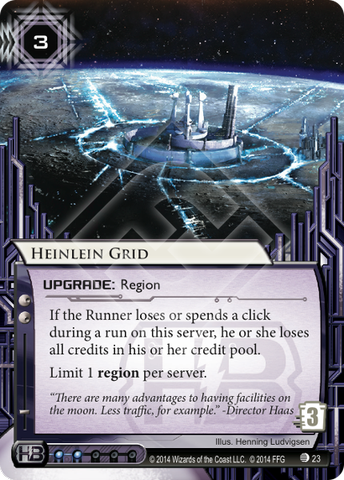 (Up and Over era)
Him 271
It also gives people running Wanton Destruction a bit of a slap! — Jashay 5 Mar 2015
It works beautifully with Turing protecting the remote server. — kage02 5 May 2015
A question - Does the Corp player rez this card before the runner decides to click through and ICE, or can it be rezzed and triggered after the ICE has been clicked through (or clicks have been lost)? — esutter479 6 May 2015
#esutter, if the ability were retroactive it would probably be worded "if the runner spent or lost at least one click" the phrasing makes it so that you cant res this after the fact, it must be ressed before — tsuruki23 15 May 2015
agree, The text implies the card must be rezzed before the run to take effect. IE - this is not a snare or trap card. I like the idea of this card sitting behind HQ or R+D to make a single ice like #Hourglass super effective. Also worth noting the effect triggers imediatley and not after the run meaning any access and the runnar cant trash or pay for anything #NAPD Contract — Tanglew00d 1 Jan 2016
Enforcer 1.0 is worth a look-in, I'd think. — LordRandomness 5 Jun 2016
I think you could rez this as the runner approaches the first ICE. EX: Your scoring remote has a rezzed Ichi and an unrezzed Heinlein, and you've IAA behind it. Runner click 1 runs on scoring remote, planning to click through it. Before encountering the Ichi, you rez Heinlein. They can't jack out. You grin smugly. — PureFlight 8 Jun 2016
Where are the rulings on these cards?!?! The FAQs suck! It's obvious about ELP, but what about runner announces run. you have an un-rezzed Eli, so you rez your Heinlein and say GO! He is, ok run the ETR, otherwise if he clicks thru he loses his credits, end of story! But no rulings to be found, like usual, some subpar reddit out there with no ruling probably, your usual google results, damn, these FAQs suck! — rezwits 25 Jan 2017
Sorry for that but my only problem that is beginning to start with this game, is every time you "think" you have combo, you can't ask anyone cause well, then you lose the secrecy. But even if do ask, there is this mob that shoots "Every Freakin Combo" DOWN! It's getting so sick! I am starting to loose it over here, for once I would just like to see card A and card B and go oh, this with this works. But then oh if it's too powerful, "here comes the judge"....with the Ruling, and it's like why can't we just do what the cards SAY! — rezwits 25 Jan 2017
I don't really think a ruling is required for timing. When a runner approaches the first ICE, the corp has a window to rez any cards they want in addition to the approched ICE. The runner cannot jack out before encountering the first piece ICE. So, you rez Hielen before they decide to click through — FreqKing 30 Apr 2017