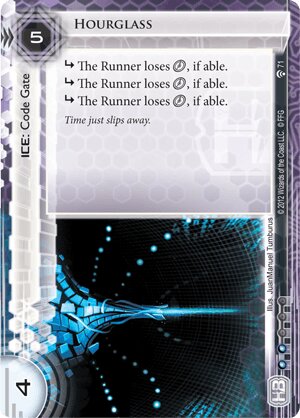 Time just slips away.
Illustrated by JuanManuel Tumburus
Decklists with this card

Hourglass saw some experimentation when it was first released, and it still sees some play. Unfortunately, its purpose is to force the runner out of clicks to give the corp some breathing room. The fact that it is strength four and out of an au naturale Yog is good for it, but it suffers from the problem all ICE does - rarely will the subroutines fire more than once. Add to that that if the runner wants to risk it, running last click makes this piece of ICE not even a tax, as the subroutines will do absolutely nothing.

It can cause some problems, and while it may be useful to stop the runner from clicking through the next piece of Bioroid ICE they encounter, positional uses are always harder to pull off and make ICE that rely on it less effective. It falls short that even when its subroutines are guaranteed to fire, it is not something that will have an effect for more than a turn or two at most, and after that just becomes a light tax, if one at all.

Ryon Knight might see Hourglass be given some use. While still a two card combo, if seen and played early enough it's a guaranteed brain damage (Unfortunately though the strength of Hourglass still leaves it vulnerable to Net-Ready Eyes+Yog.0). Combo heavy, but at least Knight also works well against runners worrying about Brain-Taping Warehouse and clicking past Bioroids.

Here's another way to think about this card: Where do you want the runner to run on their last click? Probably into your other, more dangerous Bioroids, Hourglass works as something as a filter ensuring the Runner encounters them without any clicks left. Tags, damage, anything you want to pivot towards. Wyrm is a nice natural counter here as with any 4-strength ICE out of the Anarch set.

(Data and Destiny era)
fetish 12
How is Wyrm a Counter here (or anywere else)?? To break this Ice with Wyrm costs 16 Creds! Besides, if the runner encounters this and has no decoder to break it, it would be really stupid to continue the run, if there is still an unrezzed Ice behind this, that could possibly be something nasty. — haywire 18 Nov 2015
Let's assume they meant Yogsucker... — LynxMegaCorp 18 Nov 2015
Why use Datasucker tokens when you can use 1 credit to drop the strength to 3, then Yog it? — fetish 18 Nov 2015
It would take 4 credits to drop Hourglass down to 3 strength with Wyrm. (Wyrm is 1 strength, so 3 credits to pump it to 4 strength and 1 more credit to lower Hourglass.) — the_nacho 18 Nov 2015