This decklist is not legal for tournament play currently, due to Card Errata, Rotation or Legality.

Adam is better than criminals and shapers (3rd at worlds)

Before anything else I would like to shout out my friend Drenus' Art, who created this awesome Adam art, check him out here: 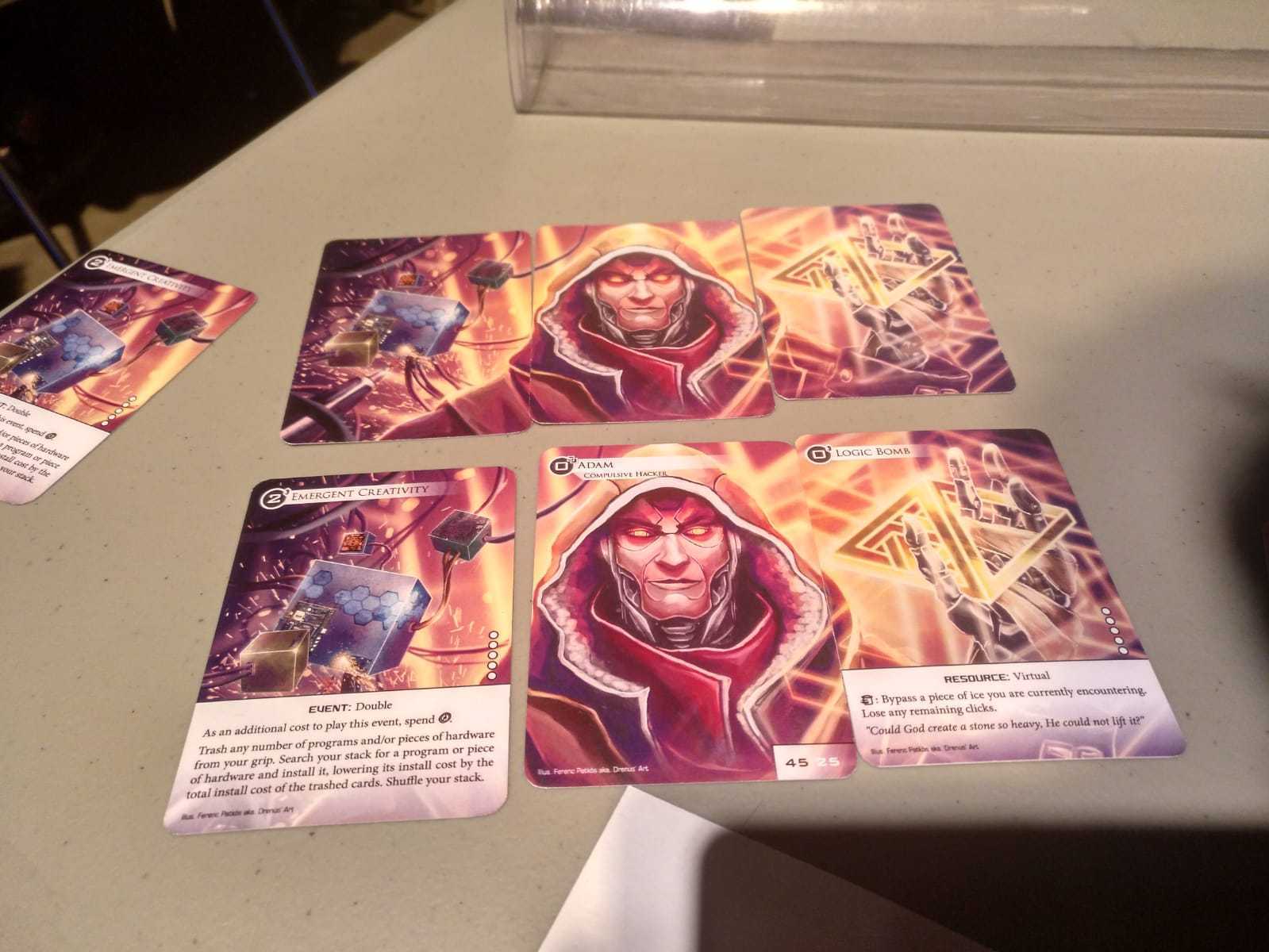 Also thanks for everyone at NISEI for keeping the greatest game alive, and the community, for continuing the run. Also thanks for all my opponents it was a pleasure running with you!

This is the Adam deck I brought to worlds and took 3rd place with. It is definitely my weaker deck, finishing 5-6 (I think) while my corp deck finished 12-1. I'm going to be honest I dont really remember all my matchups the first day, but the second day I lost to ASA (non rococo assetspam), kill Azmari, and won against jinja ASA and the same Azmari on stream. During this 3 days of playing Adam I realized that I made some bad choices with this deck, so lets discuss them:

Lets start with the unicorn in the room: Film Critic

In our meta here in Hungary/Czechia there are a lot of good jinteki and argus players, and when Engolo got restricted I didnt even think about throwing FC out. Looking at worlds meta, it also doesnt seem too bad because its good against Argus, Lakshmi, Sportsmetal and IG, but I only faced 1 IG and 1 Lakshmi out of those, and didnt even have time to find my FCs vs them. all-in-all it just didnt feel good and I will switch back to Engolo for the early pressure and try out whistleblower. Mad Dash is also worth mentioning, although "Freedom Through Equality" does a very similar thing without a unicorn symbol, so there is that. In hindsight I would definitely change out one more Interdiction for a second FtE in this 3/5 agenda meta

I am super happy with my choices here. Rezeki just feels like a better Data folding, being one cheaper and not a resource, and PAD Taps are awesome. I rarely had big money problems, and you dont really need draw besides Safety First.

I already talked about missing Engolo, but I am also not sure about my killer choice. I was on Bukhgalter for a long time and I miss the efficiency of it, but I cant justify the influence cost, and I wasnt too disappointed with Na'Not'K so I'm gonna probably keep it. Also with engolo you can break some stuff cheaper than Na'Not'k, and even if you dont Logic Bomb is there for you.

This was a bad choice. I am not sold on Clone Chip, but playing 1 or 2 Reclaims should be a no brainer. recurring Logic Bombs just seem sick

Here is my hottest take of the day probably: RNG Key in Adam sucks. It just makes you play worse for a low to medium benefit. In my opinion the ideal Adam strategy is only run RnD when you see and agenda on top with Find the Truth, and only pressure HQ and remotes. Running RnD just for RNG Key feels like a waste of a click as soon as rnd is iced. Also the 1 memory early is better spent on rezeki

All in all this is a solid Adam list that still has some kinks to work out, it got carried by my corp, but when it mattered, it won me games. I would recommend anyone playing some Adam, I think he is the most fun runner by far.