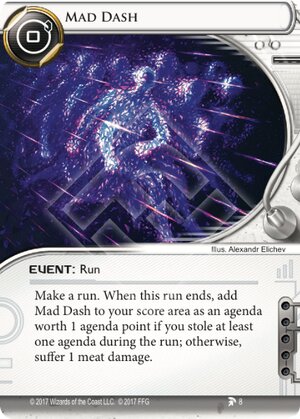 Make a run. When this run ends, add Mad Dash to your score area as an agenda worth 1 agenda point if you stole at least 1 agenda during the run; otherwise, suffer 1 meat damage.

I haven't actually used this card yet, so I could be wrong, but I feel that it is too powerful; especially considering the zero influence and play cost. I envision a deck that includes three of these and three "Freedom Through Equality"s to potentially turn any two-pointer into a four-pointer. Combo with a few expose cards like Infiltration and Drive By to confirm the presence of an agenda in a remote server. And/or combo with Globalsec Security Clearance or Find the Truth to get the agenda off the top of R&D; no multi-access required. If you go the latter route, you may want to have a Councilman on the table to stop an un-rezzed Jackson from ruining your Mad Dash.

Now I would hesitate to use this card versus Jinteki, especially PE, unless you've already stolen their Philotic Entanglement or you'll get game point.

Perhaps this won't work as well as I envision, but I'm definitely going to try it out once it is coded on jinteki.net.

(Daedalus Complex era)
quailman2101 277
Also Indexing. — HollowsHeart 5 Mar 2017
And SpyCam. Potentially Showing Off with all the new Corp tools for putting stuff at the bottom of R&D. There's a lot of ways to ensure, Mad Dash will work. And it's not only Mad Dash. With Freedom, Notoriety, Fan Site and Cheela a runner can include up to 12 agenda points in his deck. Either one of those cards ain't problematic (though Mad Dash could have cost at least 1 inf...), but all of them together are a bit much. You simply steal a single 2-pointer with Freedom + Dash combo, make a triple Noto turn and you're at 7, without running in more than 2 turns. — Krams 6 Mar 2017
I meant 15 aganeda points, obviously. Though, tbh, 2 Mad Dash + 2 Freedom + 3 Noto should be enough to consistently win by stealing a single agenda (or two if you happen to find a second before you pull off your Noto turn). — Krams 6 Mar 2017
Or you could use it with GFI and get the same amount of agenda points as the corp. Totally unfair. — bartofdenver 12 Apr 2017
3

Exceptionally strong. Against a deck that is mainly using 5/3 agendas, you only need to steal 2 agendas rather than 3. Against a deck mainly using 2 point agendas, you need to steal 3 agendas rather than 4. It's extremely strong against decks running mostly 5/3s, and it's unbanned with the return of Azmari, an ID that frequently uses six 3-point agendas.

Unlike other artificial agendas, Mad Dash is very easy to use. Notoriety requires 3 successful runs on central servers and Freedom Through Equality costed $3. For corps, Echo Chamber costs $4 and 4 actions and Gene Splicer costs $5 and 5 actions. Mad Dash costs $0, 0 influence, and 0 actions beyond the run you were already going to make. Mad Dash's only limitation is that you should be fairly confident that you know where an agenda is and are able to score it. In decks running Stargate or Imp or Falsified Credentials or Find the Truth or Turning Wheel, that's usually a resolvable issue. Corps now have slightly more counterplay against this than when Mad Dash was banned (e.g. Spin Doctor can protect archives and stronger upgrades can protect scoring remotes), so if you do know where an agenda is, it's slightly harder to guarantee that you can score it. However, this is still a very reliable extra-point, and overall one of the more powerful $0 cards in play.

This effect fits in well into almost any runner deck that plans on scoring out, except for decks which mainly run with run-events (e.g. Khusyuk decks).

This is probably intended as a balance against decks that use 6 3-point agendas, but there's a lot of collateral damage on most other corp decks as well.