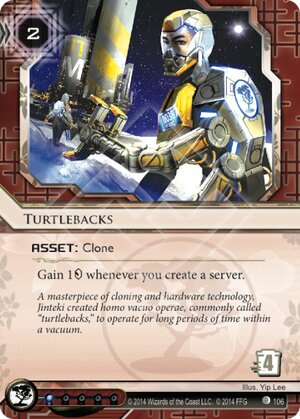 Gain 1credit whenever you create a server.

A masterpiece of cloning and hardware technology, Jinteki created homo vacuo operae, commonly called "turtlebacks", to operate for long periods of time within a vacuum.
Illustrated by Yip Lee
Decklists with this card

I initially dismissed this card, on first glance it looks like a worse PAD Campaign that also uses a dot of influence outside of Jinteki. Yes, the card works okay in faction, especially in a shell game Jinteki where you might occasionally install 2 traps and an agenda in a single turn. Seems okay. If you'd trash a PAD, you'd probably trash this too. It might be a little more bursty than a PAD in such a deck, but will probably give you a similar amount over the course of a game.

What I think, though, is that this is an NBN (specifically a Near-Earth Hub) card in red clothing. With a deck packing 10+ assets you intend to install naked onto the table (typically things like Marked Accounts, Jackson Howard, and Daily Business Show), it becomes quite the money making engine. You only have to install one new remote a turn (not too difficult in NEH) in order for it to be just a PAD Campaign. And they pay for themselves too; your second copy costs just 1 to rez, and the third one is effectively free.

But it gets better!

Having three out turns any asset (or upgrade or ice you don't want) into a better Green Level Clearance. It works perfectly with the License Acquisition agenda, as scoring that gives you an install and a few credits, and you also gain the money when installing an AstroScript Pilot Program to fast advance with a token. Mix in an Architect too, and you can install new remotes on the runner's turn, giving you cards and credits (as well as recurring previously trashed assets).

I've been running this in a deck with 20 assets and upgrades (plus another 8 agendas which can be never advanced), and it has been an absolute star. NEH draw, Architect, and Daily Business Show all help you draw into them very quickly, and they're often one of the first cards I want to get down onto the table. A savvy runner (or one who has played against me before!) will realise their money making potential and trash them early... but the four they spend doing that is four that not spending trashing your SanSan City Grid or Marked Accounts, or stealing your NAPD Contract.

Don't underestimate this card. Like Primary Transmission Dish, the person adding it to their deck has done it for a reason!

(Order and Chaos era)
unitled 464
Interesting take. NEH can certainly afford the 3 inf for including them, but what do you sacrifice compared to a more "standard" NEH/FA? also would like to see a review for PTD as this has piqued my interest ;) — zithith 18 Mar 2015
Combined with Diversified Portfolio, I think Turtlebacks/Pads/Marked Accounts (maybe even Mental Health Campaign?) in NEH offers one of the strongest economies in the game. My problem's been figuring out what to do with the money... — lolpaca 18 Mar 2015
For a look at a deck using it, check out mine here: http://netrunnerdb.com/en/decklist/17561/turtlepads-grail — unitled 18 Mar 2015
And my comment about Primary Transmission Dish is referring to the fact that it's ONLY used (pretty much) by decks that want to do something nasty to you! You don't see it often, but when you do you can make a reasonable stab it will be accompanied by Midseasons, Punitive Counterstrike, or SEA Source with Scorched. Just about everything with a big trace does something horrible to you! — unitled 18 Mar 2015
Great review - inspired me to test out the Turtle in my horizontal NEARPAD-style deck, and it's worked a treat! http://netrunnerdb.com/en/decklist/23050/infinite-hub — TheseGlyphs 1 Jul 2015
1

Be an asset spammer and make money while you do it. For this, Turtlebacks has you covered.

At 1 influence, this could go easily with notorious assets spammer like NBN: Controlling the Message.

This card combo well with Team Sponsorship and Ad Blitz. Team Sponsorship will allow you to put new or old piece on the board, getting some creds in the process. Ad Blitz is even better, it let you put a ton of assets on the board (only advertisement subtype). In a deck using Spark Agency: Worldswide Reach, which use a ton of those, this will be a quite useful, even if will trigger the ID only once.

There is a cost to it, but it lower the cost of any asset put on the board by paying upfront some creds. If you are able to keep 3 Turtlebacks on the board, making 3 creds to put a new asset on the board is awesome. That is good economy.

Finally, this is a very "world of netrunner" card, mixing clones and technology. The flavor here is very good, just like the art.