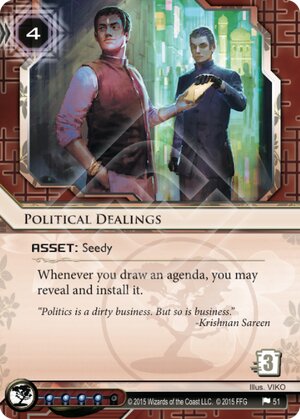 Whenever you draw an agenda, you may reveal and install it.

"Politics is a dirty business. But so is business." -Krishnan Sareen
Illustrated by VIKO
Decklists with this card

This card.......seems to be kind of aimlessly wandering around, looking for a place to fit. It looks like a fast-advance card, but at 4-rez-3-trash, no sane runner will let that stay out for more than a turn, it needs to be protected and left out for several turns to do it's job and there are much better fast-advance cards out there. Even if you were trying to make a jinteki FA deck, you would likely just splash in better options. FA decks don't run the kind of ice needed to keep this safe for long enough to be worth it.

Well, what about IG? I mean, when it costs 8 credits and a net damage from Hostile Infrastructure to trash it, then it would be able to sit around even with no ice, right? Except IG wants to run lots of 5/3 agendas like #thefutureperfect and Global Food Initiative to keep their density as low as possible so they can make the game last so long your grandchildren have to finish it. You wouldn't be able to score the agendas and would just be giving them up for free.

Wait......what's that.....off in the distance............a pair of loving arms willing to take this poor lonesome card in and give it a home. A place where it will fit right in and get all the affection and belly rubs and treats it could ever want. And that place is Palana Foods.

Yes, I believe this card is the main piece of the puzzle to create what will likely be the primary archetype for palana foods decks.......a "phoodcoats" if you will. Allow me to explain: You play the Palana Foods ID, you build a deck of heavy EtR ice, lots of econ, and most importantly, almost nothing but 3-to-score agendas. You ice up R&D and build an arctic wasteland of a scoring remote, BUT instead of putting agendas in it, you put in Political Dealings. Why? Because you have a few Pālanā Agroplex and Daily Business Show sitting around, ALL OF WHICH STACK. It shouldn't be unreasonable for you to be passively drawing at LEAST 3 cards a turn (on a good day 4 or 5), and with a handy pile of credits at your side, the instant any of your 3-to-score agendas hits your hand, it's yours. As long as your "server-formally-known-as-scoring" can keep your Political Dealings alive (hi there Ash 2X3ZB9CY, Caprice Nisei, jeez just get married already.....) you literally just set up your remote and some money, then sit back and let the 7 points fall into your lap. If the runner does trash your precious Political Dealings, you can always use Interns to just drop it right back in. With Biotic Labor you can score 4/2 agendas as soon as you draw them, and with the new "Clones are not People" you can get some extra points sprinkled on to make that clock run even faster for the runner, putting an enormous amount of pressure on them (that last Medical Breakthrough becomes a 2/3. Gross.) It might take a bit of setup, but once this engine is online, you should reliably be able to score out from 0-win in 4 or 5 turns. That's just dirty. Wait until the right moment and you can turn a scoring window into a scoring "took out the whole damn wall". Throw in some Hostile Infrastructure, and trying to get through your Ashigaru Tollbooth Komainu server to trash 3 cards (ash, caprise, Dealings) will be a tempo hit they will take a long time to come back from, giving you time to just Interns or drop another Dealings into the server and almost guaranteed get 3 or 4 agenda points scored before they recover enough to contest you again.

I have a strong feeling this will be the go-to jinteki glacier shell, especially after RP rotates. It's not my playstyle, but I find it hard to ignore how effective this deck can be and how relatively easy to pilot. Someone out there give it a whirl and tell me how many j.net games get ragequit when you are scoring an agenda out of hand almost every turn in a glacier deck. :P

(Democracy and Dogma era)
ChairmanHiro 454
Have you thought about the synergy with Heritage Committee? — MightyToenail 2 Apr 2016
This is a cool idea but I think the problem will be deck slots, you're devoting space to Agroplex, DBS, & Political Dealings, plus defensive upgrades. I'm trying to assemble a list along these lines but it's tough to find space. — phette23 19 Apr 2016
Take it from a guy that installed multiple Agroplexes once - Fisk Investment Seminar is still a thing. With that much draw (even with DBS slipping one back in), say you're living the dream and hitting 4-5 draws a turn, you roll out three Braintrust and yay, game point. Fisk Seminar plus multiple Spoilers can easily deck you out before you get your last. It's a great strategy, don't get me wrong, but it's a double-edged sword pulling that much of your deck up at once. — GrantZilla1979 25 Apr 2016
There is alway the museum of history route. The extra cards needed for the influence gives some breathing room on deck slots plus you get to shuffle 2-3 cards back a turn when your drawing up 3-5. And ( spoiler alert) there is a new jinteki agenda coming out in the last pack "improved pro tine source" that is a 4/3 that gives the runner 4 credits when scored. It could be scored out of hand in that deck your talking about. — Makehate2me 30 Apr 2016
6

The most powerful and difficult to utilise function of Political Dealings is as a Clot-buster. If the corp can draw an agenda during the runner's turn (preferably after the last has been spent) the corp can fast advance right through a Clot, since the agenda was not installed on the same turn. There's only one ID that can realistically hope to make this concept work: Near-Earth Hub: Broadcast Center.

Panic Button is a possibility, but has way too many moving parts to be realistic. Errand Boy and Advanced Concept Hopper may be workable companions to this strategy depending on the state of your servers.

Fisk Investment Seminar has also become even more double-edged than before.

When Jeeves Model Bioroids are released it may also mean fast-advance for 4/2 Agendas as well.

(Democracy and Dogma era)
Zakalwe 479
Fisk: Won't that just mean they have three clicks to go hunt the installed Agenda you revealed... you know since Fisk is always click 1. — Goldstep 10 Apr 2016
Well it's may reveal and install. If the corp doesn't have a scoring server set up it can choose not to reveal any agendas. It can also be a distraction play. Say the corp ends up with an Astro and a Beale in hand after the forced draw, so it throws a Quantum Cat or TGTBT into the scoring server, that could be enough to divert the planned Legwork run. — Zakalwe 12 Apr 2016
Fisk himself makes more sense though. They run HQ, and make you draw? You install. — Goldstep 14 Apr 2016