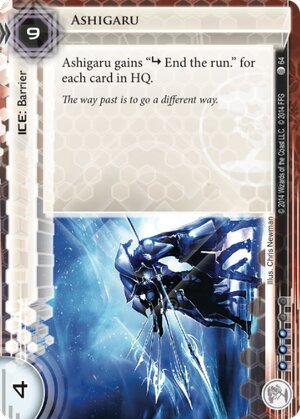 Ashigaru gains "subroutine End the run." for each card in HQ.

The way past is to go a different way.
Illustrated by Chris Newman
Decklists with this card

This ICE is an absolute nightmare for Runners to encounter. Even with Corroder, Cerberus "Lady" H1, and Battering Ram this is horribly taxing. In a normal, 5 card max hand size deck, it will cost Corroder 7 to break. With Cerberus "Lady" H1, you'll get one solid break against Ashigaru but next run you're screwed. Battering Ram also costs 7 to break. Just under D4v1d range, this makes even Quetzal shudder.

Ashigaru is a great ICE, however its usefulness is lessened by its cost: 9 to rez is absolutely painful in some decks, and at 3 influence it's hard to splash in many decks outside Jinteki. If you do decide to splash for it though, you probably won't regret it for long. This ICE is best utilized in decks that can make lots of money: Jinteki: Replicating Perfection comes to mind first and foremost, where rampant Sundews can earn you your money back pretty fast. Ashigaru could see some play in NBN: The World is Yours*, but the influence cost hurts still. Janky Cerebral Imaging: Infinite Frontiers decks could run this for ensuing hilarity.

Ashigaru could work well with Chum and Sensei or anything else to extend the number of subroutines/taxing potential. Midway Station Grid and Ashigaru sounds like hell on Earth to encounter.

Overall, Ashigaru is a super taxing piece of ICE, and while it might have a rough influence and rez cost, the taxing potential on the Runner could very well outweigh the initial cost.

(The Source era)
WardOfTheWoods 701
One little detail that was missed: This card is absolutely stomped out (albeit it's 8 creds to play) by Morning Star. Bold Professor players with no economy issues would eat Ashigaru alive...just sayin'. :) — esutter479 1 Jan 2015
Any Strength 4 ICE is going to have the Atman question, and honestly you'd rather have Lotus Field as a pure ETR machine. Needs more scary text for 9 credits — PentagonJR 10 Dec 2015
It's like a hyper expensive IQ built on weight of subroutines instead of strength! This means running it with Panic Button on HQ is even more hilarious, letting you tack one-for-one taxing onto the already high tax potential...and in Jinteki, when you have to discard due to hand size you just discard traps that fire in Archives. Heh. — LordRandomness 27 Jan 2016
So good against Faust though! It's actually impossible for Faust to break without a Datasucker or something as well. — durinthe 30 Jan 2016
Just add a [[TL;DR]] before Ashigaru and look them faint. — culoman 15 Feb 2016
Word of warning though, GS Sherman M3 breaks this for 4 credits every time. — LordRandomness 31 Mar 2016