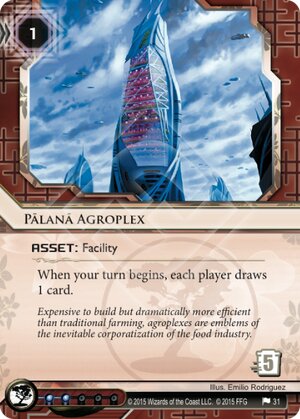 When your turn begins, each player draws 1 card.

Expensive to build but dramatically more efficient than traditional farming, agroplexes are emblems of the inevitable corporatization of the food industry.
Illustrated by Emilio Rodriguez
Decklists with this card

A support card for the new Pālanā Foods, this asset allows the ID to double dip & receive drip credits on their own turn as well as the runner's (assuming the runner draws, which is guaranteed with Wyldside, for instance). Currently, Drug Dealer, Astrolabe, & some rarer interactions (e.g. I've Had Worse triggered by pro-active net damage) are the only ways to get that credit.

While this card looks simply like a bland support piece to make Pālanā even richer, it's extremely interesting as sources of corp card draw are few & far between (Jackson Howard most notably, Anonymous Tip mostly forgotten). With one Agroplex running, the Corp is essentially a runner with Wyldside installed (draw 2, 3 left) & no Adjusted Chronotype. I await with bated breath the corp version of Noise that makes this a viable proposition all on its own. Given that the Agroplex is continuously active & more likely to stay in the game than JHow, it's actually the only source of stable increased card draw other than the Near-Earth Hub ability.

There will be times when Agroplex will be counter-productive, because giving the runner a free draw is a tremendous downside. It's likely wrong to simply install it as soon as you see it. Rather, Palana might shine in the late game when the runner is already set up & additional cards do little to improve their board state. Besides the runner's draw, there are certainly times when the corp doesn't want to draw, either because they're already agenda flooded or because their whole turn is locked up advancing an agenda to score. Unlike Wyldside however, the corp can simply turn off Agroplex by installing over it.

Other potential uses outside P Foods:

Pālanā Agroplex is a balanced, interesting card with an effect we haven't quite seen before, the corp forcing the runner to draw a la Fisk Investment Seminar. There are probably going to be very inventive uses but finding a way to gain value from it despite the downsides will be tricky. In P Foods, it's probably an auto-include, though maybe only a 2-of as running multiple at once introduces too much corp draw.

(Business First era)
phette23 2237
One interesting interaction is with Kala Ghoda Real TV. since it is a paid ability and both effects trigger at the beginning of the Corps turn, you can trash key pieces before the runner has a chance to draw them. — WayneMcPain 14 Mar 2016
I think a lot of Jinteki players have had games where it's hard to win until the runner's stack runs out (this happens to me sometimes in PE). I think Agroplex can help speed up that situation, especially with Kala TV. Also, Chronos Protocol gets an extra card to snipe with EMPs, and brain damage decks can force runner overdraw (Cybernetics Div comes to mind). Could help with a Harmony Medtech rush deck too. — PureFlight 14 Mar 2016
I guess KG TV is an interaction. The runner would've eventually drawn the top card anyways, regardless of Agroplex. — phette23 14 Mar 2016
Tough part of Cybernetics Division is the corp's hand size is smaller too & corp discards are generally more troublesome than runner. Then again, Cybernetics Court can counteract the downside, definitely something there. — phette23 14 Mar 2016
Does this card stack? ie. Will two Palana Agroplexs cause both players to draw an additional two cards? — Jthrevenge 6 Feb 2019
Yes. — BlackCherries 6 Feb 2019