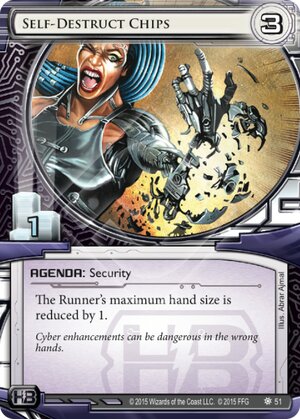 Cyber enhancements can be dangerous in the wrong hands.
Illustrated by Abrar Ajmal
Decklists with this card

This card has proven to be quite fantastic in Cybernetics Division: Humanity Upgraded. I have found that many times you can score this very early on by just install, advance, advance in a naked remote and then pass the turn. Most people will be expecting it to be a Cerebral Overwriter and as long as they don't have a Feedback Filter installed or in hand, they cannot afford to run it and go down to a 1 hand size that early in the game. So when you score it to take them to a 3 hand size it now opens up the game for so many other things and will make the runner hesitant on every run and access from that point on. The other nice thing about this is that Brain Damage prevention cards like Feedback Filter and Monolith will not help them because this is just reduced hand size as opposed to Brain Damage. Just make sure if you try what I mentioned you don't leave yourself open to an Account Siphon or Vamp for them to just drain your credits to zero and then run the double advanced card.

I think you can't go wrong by including this in your Brain Damage deck which is finally a thing thanks to the new cards we got in Chrome City and even more that are coming soon. If you are worried about runners that increase their maximum hand size then you might just want to include some of the following cards that will tag them and/or possibly damage them for the kill: Snare!, Ichi 1.0, Ichi 2.0, Cerebral Cast.

You could pack a Lab Dog or two to hopefully knock out a piece of hardware that increases hand size. However the runner picks the hardware to trash so you might have a better chance of getting the one you want with Shattered Remains or Power Grid Overload. I have yet to face a handsize increasing deck when playing this ID so that is likely more of a meta call to even consider including those cards. Corporate Town is another card that can help you get rid of a Beach Party or Public Sympathy but rezzing that requires forfeiting an agenda so that would be counter productive including that alongside this.

Some other cards that pair nicely with this one: Valley Grid, Chairman Hiro and Gyri Labyrinth

(Chrome City era)
rediknight 58
Good commentary! One point I'd pick up on though: Corporate Town is an excellent include alongside this since if you're going to be forfeiting agendas, you want it to be 1-pointers... — LeonardQuirm 4 Jun 2015
If I was using agenda forfeiture cards in HB, I'd be running Domestic Sleepers for sure. — Nacobs 18 Sep 2015