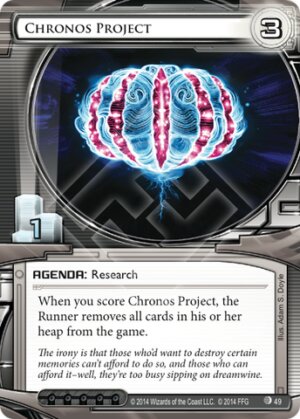 When you score Chronos Project, the Runner removes all cards in his or her heap from the game.

The irony is that those who'd want to destroy certain memories can't afford to do so, and those who can afford it-well, they're too busy sipping on dreamwine.
Illustrated by Adam S. Doyle
Decklists with this card

One of the biggest advantages that runners have is their ability to use their heap. Criminals love using Same Old Thing to stretch their Account Siphons, Shapers love Clone Chipping their Ladies, and Anarchs love pulling back those juicy viruses with Déjà Vu. The runners most notorious for this are, of course, Exile and MaxX, but almost every deck these days runs some form of recursion.

This gets even nastier in a deck that trashes cards, either through destroyers like Grim or net damage like Blacktree's Thousand Cuts archetype. Oh, I'm sorry, all of your Corroders were in the garbage? Well, I just took out the trash.

This card ranges from "mildly annoying" to "absolutely game-ending", depending on the matchup and when it gets scored. If you can afford to lower your agenda density with a 3/1, this is strong option.

(Order and Chaos era)
tiedyedvortex 4647
I remember a time when I was able to Power Shutdown both of a players Corroders, then score Chronos Project the next turn behind a single Ice Wall... First week after Chronos Project dropped, and it worked perfectly! — PaxCecilia 26 Feb 2015
The other important thing to remember is that as a 1-pointer with a "when scored" ability, it's ideal for forfeiting as a cost. — LordRandomness 27 Jan 2016
I'm not sure it stops the Cyber-Cypher Scavenge play, since they can trash an installed Cy-Cy with Scavenge and then reinstall it with the same Scavenge. — Zakalwe 9 Jun 2016
5

This is hands down my favorite agenda in the game, for a few reasons. First, I'm often indifferent to it being stolen or scored, as it's only one point anyway. In fact, in many cases, I want this to be stolen, as 3/1s aren't the greatest return on investment. But why? Fear. All the runner has to do is know at least 1 copy is in your deck, and all of a sudden, their plan to use Clone Chips, Test Run, Levy AR Lab Access, Déjà Vu, or Same Old Thing to do whatever it is they wanted to do with them is called into question.

This frequently causes the runner to make bad decisions, or at least sub-optimal ones. "Maybe I should SOT that Account Siphon right now, even if I don't know if I can get into HQ." Or sometimes it just makes for very strange decisions. "Oh no, I was planning on playing my Atmans during the run via Clone Chip. With all that unrezzed ice and no left, what strength do I make them?" This is, of course, promptly followed by the runner installing them with guesses as to what strength they should be.

While all of this makes for great entertainment, what if you do score it? Well, in the right circumstance, it can be game over. Runner has no stack left, and was planning on Levying? Whoops, try again next game. The best part is, all factions fear this, save for maybe a Criminal without Same Old Thing or Anarchs without Déjà Vu. Still, those are the exception, not the norm, and that's what makes this card so fun. Best of all, you probably only need one of these in your deck. Maybe. Or two. Does the runner know how many you have? Well, aside from "less than four," no, and keeping them guessing is all it takes. Don't forget your poker face.