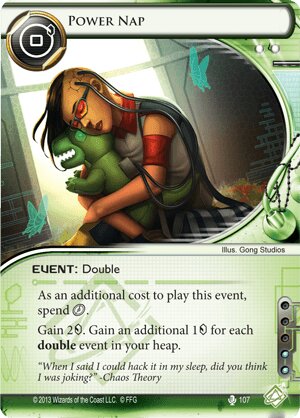 Gain 2credit. Gain an additional 1credit for each double event in your heap.

"When I said I could hack it in my sleep, did you think I was joking?" -Chaos Theory
Illustrated by Gong Studios
Decklists with this card

Maybe this card will finally see some use with Starlight Crusade Funding. The issue is that doubles are spread across all three factions and fit in wildly different decks. Unless your deck has loads of influence to spare, the double economy setup is hard to justify. Lucky Find already takes influence no matter what, and the other money double, Queen's Gambit is unwieldy and also high on influence.

I want to love this card, but it really relies on having Lucky Finds already used. If pulled first, the payout is equal to clicking for credits, which is a bad use of a card. But, the dream of making 2 + 3 for Finds + 3 for Gambits + 2 other Naps = 10! But that is only a dream.

(Breaker Bay era)
Steamwood 295
Lucky Find, Drive-By, Game Day, Power Nap. That's a reasonable economy engine if you're playing a 1x Adjust Chronotype. Without Drive-By, using Power Nap, Game Day and Lucky Find, you're only at 6 influence for that. Game Day for draw, then you're at 3, 4 and 5 for Power Nap without any other cards. At 1 click per, that's equivalent to 3 more Sure Gambles over the course of all 3, even without Lucky Find. — Wookiee 22 May 2015
1

This card has probably never received a lot of love but let me tell you the power of the Power Nap is so real. I mean doctors recommend this card on a daily basis. It is a crazy economy card when you build your deck around it.

Obviously, you enter power mode when you start hitting 10 creds for a nap. Anything less than that is just a regular nap and those are for.... well there not for any self respecting runner. In! Out! How do they do it? Drugs, a whole lot of drugs. That little angel in the picture isn't dreaming of butterflies. That's permanent brain damage after year of power napping.

So come on over to this deck and take a nap.

(Station One era)
Pantacruel 80
Did you just use a review to advertise your own deck? Lol. — LynxMegaCorp 11 Apr 2017
Yes of course^^ But also the only review for this card was dull and playing this card in MaxX is so much fun. — Pantacruel 12 Apr 2017
0

Here is a list of doubles for runners. As you can see shapers only have 3, anarchs 3 and criminals 7 (counting an upcoming Terminal Directive card) with a single (2 influence (!)) neutral (Lucky Find).

Power Nap is oddly a card that's more useful in criminal decks in terms of fuel and probably in terms of usefulness too. The thing with Power Nap is that it's an economy card that works best in the middle to late game. Criminals generally get their money from runs which become less effective after the early game. Criminals also have a nice trick to get doubles in the heap: Planned Assault with Running Interference. Meanwhile one of the most common runner doubles is criminal as well: Hostage. And although expensive in influence an event focused criminal could make good use of Game Day to replenish their grip.

In shaper however napping is not very powerful. Eureka! is the most useful but dangerous unless you combine it with Rolodex, Making an Entrance or Spy Camera to ensure you have the card you want on the top of your deck (here is a list of cards of 8 or more, Femme Fatale, Monolith, Rachel Beckman, Security Nexus, The Toolbox and Torch seem most useful for shapers). Game Day works best if you know you're going to run low on grip cards (preferably with a lot of Public Sympathy but I doubt shapers do that often). And of course Power Nap triggers on itself as well, which is occasionally useful, mostly for improving the base economics of this card.