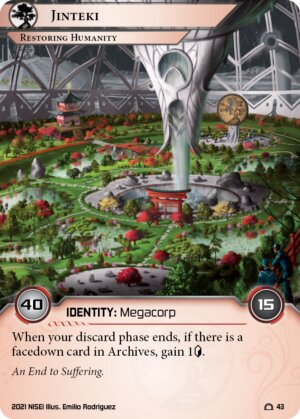 When your discard phase ends, if there is a facedown card in Archives, gain 1credit.

An End to Suffering.
Illustrated by Emilio Rodriguez
Decklists with this card

It's not a very fun ID, either to watch or to play or to play against. We already have a generic Jinteki ID (Palana) that reliably generates $1 per turn, itself not terribly fun. Maybe there'll be some clever play for Restoring Humanity in the 40-44 card range but whatever high-tempo decks are available in Jinteki, are probably better in a Palana which doesn't need to spend time/resources worrying about whether there's a facedown card in Archives or not.

I think Jinteki’s card pool could support an interesting discard-oriented ID but it should be something different than the passive $1/turn Palana already offers. (For example, an option to discard up to 2 cards each corp turn for $1 each, or even a mandatory discard each turn for some benefit).

Restoring Humanity's main card interactions currently are with very bland cards, particularly Hansei Review. This isn't an Acme or Reality Plus which significantly changes the economics on some cards or allows for strategies that wouldn't be doable in most other IDs. RH is closer to Hyoubu Institute (+$1 per turn if cards are revealed) and Nisei Division (+$1 each time a psi game resolves). Neither the conditions nor the resulting $1 are particularly interesting, and neither identity received the card support to make these playable. Other factions get way cooler and more mentally engaging versions of this. Azmari has a cool mental check on whether the Azmari player knows what the runner wants to be playing, and the runner might have to play things a bit out of order. Built to Last, not as mentally involved, but they get paid to charge forward, whereas Restoring Humanity usually gets paid to move more slowly.

If your idea of a faction-defining card is Hansei Review, you're gonna love Restoring Humanity. For everybody else, please wait for Restoring Fun.

You know how Haas-Bioroid: Engineering the Future was so powerful because it gave you a reliable credit every turn. This is roughly the same thing. It says "at the end of your discard phase gain 1 if you have a facedown card in archives" at the end of your DISCARD PHASE, so you could just draw over your hand size, dump a card, and make a profit.

This also works a bit like Industrial Genomics: Growing Solutions: you put a trap face down in archives, say Shi.Kyū Breached Dome or Shock! Space Camp or Cyberdex (make sure the trap works in archives, so no Snare!) then leave the runner at a crossroads: either give me money every turn or run archives and suffer the traps. This is also a 40/15 identity, which is always good. Although, I haven't played this deck enough or seen this get played enough. So mabye i'm stupid and also wrong =)

Ok, turns out that most of the archive-traps are rotating, but Cyberdex sandbox works very well with the Virus suite, if they want to stop you from making money from your ability, you instead make money from Cyberdex sandbox. And you can use Hansei review to make Restructure(?) levels of money and trigger your ability.

Jtfq99999 is right, instead of overdrawing, just use Genotyping to put cards in archives and pull the cards that you want back or you can try to score out a Bacterial programming and choose what goes away or the 1-influence Helheim servers to also buff up your ice.

To me this just looks like a balanced version of IG, so if you enjoyed playing Industrial Genomics: Growing Solutions, you may very well enjoy this.

Close, but overdrawing is harder than having something to install

When this is legal to play I think the only legal traps to fire from archives will be Shi.Kyu, Cyberdex Virus Suite and Space Camp. Not exactly a terrifying selection.

My mistake, Shi.Kyu's in Honor and Profit, so that's rotating too. We'll have to see what's in System Gateway. It seems unlikely that there won't be a trap to continue Jinteki's proud tradition of rigging archives.

part of the reason ETF was busted was because you could also fire it on runner turns, which doesn't work here.

In the 40 cards deck size, for the Jinteki faction, there was Harmony Medtech: Biomedical Pioneer, which rotated. Now we have Jinteki: Restoring Humanity. Is it good? Yes.

Of note, if you are running Cyberdex Sandbox and Cyberdex Virus Suite, you further penalize the runner from running archive.

The ID is pretty easy to activate, making it likely that you get about 1 a turn for about half the game, maybe more.

The only downside is that you'll need to put at least one ice on archive usually. thinning up a bit your ices.

Finally, the 40 cards deck size allow you have a better consistency. I dare you to actually go for 40 cards, and not 44 cards.