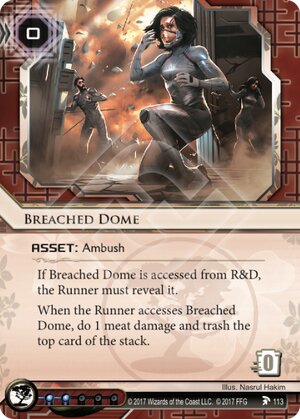 While the Runner is accessing this asset in R&D, they must reveal it.

When the Runner accesses this asset, do 1 meat damage and trash the top card of the stack.

Illustrated by Nasrul Hakim
Decklists with this card

Breached Dome feels like a replacement for Shock!. Both are simple "runner hits it, it fires" pain providers that fire from everywhere, including archives. Breached Dome has no trash cost instead of the 2 of Shock! but Shock! rarely got installed anyway as runners are typically wary of running on unrezzed cards in Jinteki remotes.

Trashing one card of the stack is not directly a problem, like the meat damage it's typical Jinteki death-by-a-thousand-papercuts. But when there are twp Breached Domes in archives a hit on archives suddenly means 2 cards from your grip and two that would soon enter your grip going into the heap. That's four cards that, things like Paperclip excepted, won't be useful to you anymore without recursion tricks. This is quite a discouragement. In particular Industrial Genomics: Growing Solutions decks will profit from the runner running archives less.

Because of the two influence Breached Dome is reasonably splashable. The best out-of-faction identity I see working with it is Skorpios Defense Systems: Persuasive Power since Breached Dome allows Skorpios' ability to fire more often on the runner's turn.

With regard to power level I'm not 100% convinced Breached Dome is very strong. It's good, it's absolutely a contender for many Jinteki decks, but it doesn't feel overpowered. It won't win you the game, it'll just slow the runner down. A card like Snare! on the other hand can win you the game when followed up with Scorched Earth. Granted, that requires a dumb or careless runner (looks away in shame).

(Crimson Dust era)
Silv 340
In wayland, unlike other jinteki ambushes, this synergies with :Reconstruction Contract:. Each one the runner hits is another counter, which is pretty great. — LordDavenport 1 Oct 2019