Force the Corp to "trace [3]– If unsuccessful, reveal all cards in HQ. The Runner may choose up to 2 of the revealed cards. Shuffle those cards into R&D." 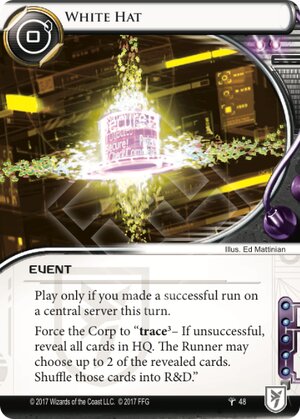 As a long time Sunny player, I am incredibly excited she is getting more support. And in this pack, the card she gets is a weird one.

After spending 2 clicks and winning a trace, you get to take a peak at the corp's entire hand. That is great on itself, as knowledge is power. But not only that, you get to send 2 cards back to R&D. In a way this card works somewhat similarly to Utopia Shard, disrupting the corp's hand and throwing a wrench into any plan they might have had. Brutal, especially against combo decks relying on Hard-Hitting News. Biotic Labor, etc.

The downside is though, while Utopia Shard could potentially hit agendas, which you then could go grab from a potentially ill-defended archives, White Hat requires you to run a now slimmer HQ again. If you can follow it up with a Legwork that is definitely a powerful play, albeit slightly situational.

Also, don't even think of playing this card outside of Sunny, with its dependence on high link AND 5 influence cost to boot. This is definitely mummy's party.

Is White hat good? For sure. Good enough to see a ton of play? Eehhhhh, we'll see. I don't think it will turn Sunny tier 1 overnight.

Now Black Hat on the other hand though...

(Council of the Crest era)
Cpt_nice 1008
Oh I think this adds huge pressure but it definitely pushes — deleriad 2 Mar 2018
..before I was so rudely interrupted ... Sunny down the Power Tap route. Ideally you have some combination of Jak and Turning Wheel so you're forcing the corp to double ICE every central otherwise you Nexus in, power tap and you still have 4 clicks left. White Hat, get paid, and shuffle away any key cards the corp was saving. (Sunny often dies to fast advance but not now.) Even without a Legwork you have massively changed your chance of stealing an agenda from HQ. The threat of this is going to have a huge impact on how the corp manages HQ. — deleriad 2 Mar 2018
Click 1: Play Black Hat, Click 2: Run RnD, Click 3: Play White Hat, Click 4: Run either RnD or HQ, depending on if White Hat found agendas. This is a brutal turn. — Krams 2 Mar 2018
While White Hat will have a decent combo with Black Hat, I honestly don't even know if Sunny will keep slotting White Hat when it releases due to how broken Black Hat is. Here's a turn for you: Black Hat, Black Hat, Deep Data Mining, Rip Deal. Take back those three cards and two other events you like while you're at it. Or you could just run HQ instead and access 14 cards in two runs. That kind of game-winning power makes it hard to justify playing White Hat on a Black Hat turn. — CelestialSpark 17 Apr 2018
One play Sunny could do to help build her resource base is use White Hat as a decent tempo hit to the corp. Run Archives (which most corps leave undefended against Sunny), then pop White Hat to scan the corps hand for agendas, and slot them back into R&D, then continue setting up. Most corps try to rush out agendas early against Sunny, so this could really hamper that plan. — Scoogsy 29 Apr 2018