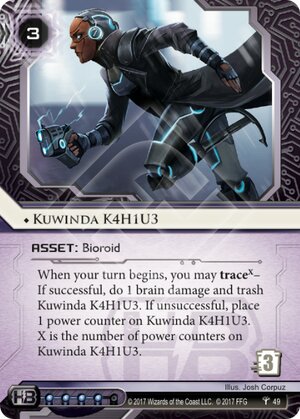 X is the number of power counters on Kuwinda K4H1U3.

Illustrated by Josh Corpuz
Decklists with this card

The dream is having multiples of this and having it fire every time, maybe even recurring it to get the runner down to a tiny hand size and then having them run into a Snare! or die to 1 Neural EMP. One can dream.

In practice though, this card can only be classified as jank. First off, small amounts of brain damage is negligible to most runners. Many even are willing to take 1 brain damage for 9 credits. You need to be able to fire this off consistently. But how? It starts off with trace 0 on the turn you rez it. That means that unless you can afford to boost the trace after rezzing this for 3, it is not doing anything unless this sticks around for several turns, acquiring counters. And during that time, the runner needs to ignore this. If this in a heavily defended remote, you are very likely not scoring anything and letting agendas pile up in HQ. If it isn't, 3 is a reasonable enough trash cost that most runners can afford to get rid of it immediately. This is maybe the one time where I would have been OK with rez/trash cost similar to Jeeves. Also, if you are facing a runner with any sort of link, this card gets progressively worse, giving them more time to deal with this or forcing you to put money into the trace to make it fire.

Never mind the fact that corp recursion is a lot harder than it used to be. If Friends in High Places was still around, I could see this card being somewhat more relevant, but luckily it isn't. So you need to run 3 of this AND be rich to have it make any impact. And build your entire deck around it. Could it potentially work? Sure, but considering that there are better ways of getting brain damage off, I don't see why you would run this for anything other than lulz.

At the very least, it is nice they are throwing brain damage decks a bone. Could have been a bigger one though.

(Council of the Crest era)
Cpt_nice 1460
On a note related only to your last sentence, I still don't see why https://netrunnerdb.com/en/card/12090 didn't do a brain damage. — LynxMegaCorp 30 Mar 2018
Same, what a misse opportunity — Cpt_nice 30 Mar 2018
It is unique. — quailman2101 30 Mar 2018
I did not mean multiples rezzed at the same time, I just meant getting this off more than once. Which is almost impossible imo. — Cpt_nice 31 Mar 2018
If you splash Surveillance Sweep you can either get it to fire more consistently or you can drain the runner of credits. — Eolirin 6 Apr 2018
Surveillance Sweep only triggers on traces during a run, so that won't work. — NinjaMike 6 Apr 2018