♦ Temple of the Liberated Mind

click: Place 1 power counter on Temple of the Liberated Mind.

Hosted power counter: Gain click. Use this ability only on your turn and only once per turn.

It is rumored that g00ru himself studied at the temple, applying its teachings to cyberspace. Many runners have followed in his path, but none have reached its end.
Shaper • Amit Dutta • The Liberated Mind 82
All sets:
Links: Decklists | ANCUR 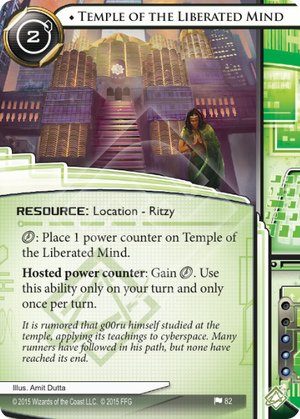 So this card rarely seems to get used. That's odd since it's not a bad card. You pay 2 to move a click from one turn to another.

A five click turn is ideal for Encore, Exploit, Notoriety (while it lasts) and Apocalypse. It also works well with cards of the form "install only if you've successfully made a run on ... this turn".

Yes, I know about Hyperdriver, I see a few important differences though. Hyperdriver is optimal for "win the game" turns since you can install a few of them on Dhegdheers and then pop them all when the time is right. Hyperdriver also gives you clicks for free whereas Temple of the Liberated Mind only moves them.

Temple of the Liberated Mind is at its best when you need just one more click but you regularly have turns in which you need that. If you have a bit slower deck with drip economy it can make sense to use some of the turns around the midgame when the corp has locked you out to charge up and once you've gathered enough money hit the corp with extra clicks.

Don't get me wrong, I understand very well that Hyperdriver is the better card. But Temple of the Liberated Mind is not a weak card in the sense that it delivers too little for its effect. Rather it's a tool that makes certain decks just a little more efficient.

(Free Mars era)
Silv 296
I think the main problem is that you are spending 2c, 1 card and 1 click (a nontrivial cost in tempo) for the ability to move something you already have to a later point in time. So you pay for losing tempo. All-Nighter is better than this, because it's 1.) way less cost (only 1 card cost to move 1 click once, no upfront cost) 2.) can store Hayley's ability as a click and 3.) can be used multiple times per turn. That last bit is important, because you might want to move clicks into the one big turn. Temple allows you to move clicks, but only one _into_ each turn (though you could move more clicks _from_ a turn). — Krams 4 Aug 2017
... and even All-Nighter is never played. I tried it in a Hayley deck using Liberated Cheela and it was okay. But other than that, it's not really an effect people want to use often enough to dedicate deck slots to it. — Krams 4 Aug 2017
I would say that the value of a click can differ depending on game situation and that in a deck where you know a click is better used the next turn Temple can be useful and outweigh the tempo cost. But the utility might indeed be too low in comparison to other cards. — Silv 4 Aug 2017
I can see this as a way to banj against prison decks before they are set, but the issue becomes, what could you be doing instead to stop them from setting up, — Goldstep 4 Aug 2017