Add Notoriety to your score area as an agenda worth 1 agenda point.

When you're this good, it's hard not to grow a fan base.
Shaper • Matt Zeilinger • Trace Amount 26
All sets:
Links: Decklists | ANCUR 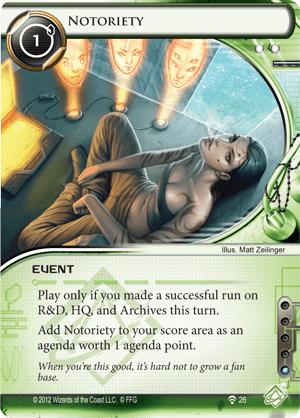 Something that might not be immediately apparent is that Notoriety is a card that primarily serves to reward early aggression. A typical aggressive runner (like Ken Tenma) is looking to run early and often, maximizing their accesses before servers get really taxing. They can use tools like Account Siphon and Emergency Shutdown to keep the Corp off balance, but ultimately they're under pressure to win before their window closes--they're burning through burst economy resources instead of building them up, so once it's gone it's gone. So as they reach the end of their window, they start getting desperate with their accesses, because if the game comes down to trying to run a server with Caprice, Marcus "End The Run" Batty, and a waiting Nisei counter, they've already lost.

Having Notoriety in your deck is an incredible release valve for that pressure. When you know where your 7th point is coming from, you can afford to play a bit more patiently. You rush to 6, and now you can stop and breathe a little bit. Maybe you pick off some assets to get the corp to invest ICE in remotes, maybe you dig for that last Lucky Find, maybe you just count up what you're going to need and click for credits. Because you know exactly what accesses you need, you don't need to play guessing games. You have your goal of "Accumulate X credits, then run three times in a row", and that's all you need to pay attention to.

A slower runner deck, such as Sunny, Kate, or Geist can run Notoriety, but they really don't need to--they're already working to hitting a critical mass where the corp simply can't keep them out of their scoring servers. They already have the breathing space that Notoriety provides.

(Business First era)
The Lord of Hats 72
I recently played a game on Jinteki.net. Gagarin vs Ken. My Gagarin had 54 cards with only 8 agendas; 7 three pointers and 1 one pointer. I spent my first (and last as you may of already guessed) turn icing HQ, installing an asset and gaining a credit, leaving me with 4 cards. Ken starts his turn with a Maker's Eye, nabbing an agenda. He then runs at HQ. I confidently rez my checkpoint, thinking he'll jack out, but he runs through it. He eats the damage and grabs the one agenda in my hand, another 3 pointer. He then proceeds to run at archives. I'm like, what?..wait...nooooo. Sure enough, he uses his last click to play Notoriety and wins the game. Notoriety of course being the only card left in his hand after the meat damage. So anyway, he was unbelievably lucky. But the lesson is clear... Play this card, you could win in one turn! — quailman2101 18 Mar 2016
2

This card is a decent consideration now that each faction has tools that specifically help with (Comet, Doppelganger/Early Bird, Eater). However, I would like to try to answer the important question of why, instead of the answer to how. What makes this card good, and why would I consider it in my serious decks right now?

As Agenda's are scored and stolen, Agenda density decreases, and this is to the corp's advantage. The most powerful effect of Notoriety is that there are no longer 20 Agenda points in the game, there are 22 or 23. This pressures the corp in a powerful indirect way.

As such, I would include this in decks that have central run synergy, and have a difficult time against Glacier Corps. This might be a fine fit for Leela, or Valencia, or Hayley. And let's not underestimate the value of an early point because the Corp let you leak in some central runs early.

All-nighter is an excellent partner to this card. You can squeeze in an extra run if one of your central runs fails for reasons you can overcome on a second attempt, and perhaps more impressively you can score two of these in one turn! It's like Runner fast advance. Other stuff like Stim Dealer can do the same job, but All-nighter is in-faction and does exactly what you need it to and no more. If you're going to do this though, you probably want some other way to abuse having five clicks in one turn.

A difficult card to score, but may have some windows with Comet and an agressive runner. If you don't you have to spend your whole turn (one click running each server and the last one to achieve this) in this and be good at it since you even have to have the another and another in your pool.

Maybe useful also with centrals only criminal or with combination of other events that make you run (Dirty Laundry) or hardware that make your running profitable (Desperado).

But it's rare to being score unless some early games or killing desks who want you to get into the servers. Also it has a counterpart in Crisium Grid

Also, in Spanish this card is important to note that had an errata and said "succesful run in R&D, HQ OR archives" which was way too good.

(Order and Chaos era)
valerian32 64
It's not so difficult, you have to prepare and do it properly. Better with Inside Job but I win at least 3 game with this card, and think about Eater combos... — Oziride 17 Feb 2015
Doppelganger will also allow you to make the necessary runs in 2 clicks. — lodger 17 Feb 2015
Doppel + Early Bird = playing all three notoriety's on a single turn. Say whaaaaaaaaaa — PaxCecilia 17 Feb 2015