"I don't care what the studies show. From my experience, I can ingest three cans of Diesel an hour for up to twelve hours before going into cardiac arrest." -heard during the eleventh hour
Shaper • Outland Entertainment LLC • A Study in Static 67
All sets:
Links: Decklists | ANCUR 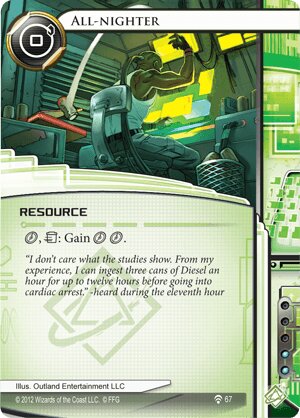 All-nighter sounds great on paper. Spend a to gain ? It's like the Runner version of Biotic Labor. However, when you think about it you're actually spending 2 to gain, well... 2. In a game where every click matters, spending a click to install on one turn seems inefficient. The other problem here is: what are you going to do with the 5 turn? If you're using that turn to Professional Contacts, or do anything non-combo related, you're doing something wrong. All-nighter can have some very powerful interactions: Wanton Destruction comes to mind first and foremost, letting you trash up to 4 cards from HQ instead of the normal 3. I can actually see All-nighter get used in a Comet Prepaid VoicePAD Hayley Kaplan: Universal Scholar deck, where you get even more value from your clicks. Now that Anarchs have Adjusted Chronotype, I could see Starlight Crusade Funding decks utilizing All-nighter to get more value from playing multiple double events in a turn. But hey, add this to the positives: it's 0 to install.

If you're playing All-nighter to just gain the clicks, you're using this card extremely inefficiently. If you make room in your decklist for this card, you want to be making the most from every click and as such this card belongs in more combo-heavy decks.

(The Valley era)
WardOfTheWoods 692
You should include the click you spend to draw it as well as the click you spend to install it. So you're actually coming out behind, which means you need an even better reason to get a 5 click turn. — tiedyedvortex 15 Apr 2015
Assuming you're just spending a click and drawing, then yes. All-nighter works best when you can condense your clicks. Using Diesel to draw into it would be worthwhile, as well as using things like ProCo and I've Had Worse, since you're getting 3 clicks out of it. — WardOfTheWoods 15 Apr 2015
It's quite janky, but All Nighter is a great addition in Paintbrush decks. — Lupus Yonderboi 15 Apr 2015
You're in fact "saving" click from your turn to another turn (at a cost of another click or fraction of it, if you really insist to count drawing -_-) — quiciuq 16 Apr 2015
I think there will be more use for this with Hayley - the extra resource install doesn't cost the click and it helps with her constant need to have money what with it being free. And later you can use it to fuel the extra click or the extra Aesops for 3 credits later. "What will I need later in the game?" is not always obvious. — Cliquil 16 Apr 2015
Playing more than one Notoriety after 3 central runs is a good use for All Nighter. — Robotron5673 17 Apr 2015
Can help against certain Bioroids... — Crashdown 23 Apr 2015
an interesting jank combo is geist with the new tech trader. play all-nighter wait till you have 2-3 tech traders out and then pop all nighter to get your click back,2-3 creds, and a card draw. prob not worth the deck slot but still gonna try it.... — gunner1060 14 Mar 2016