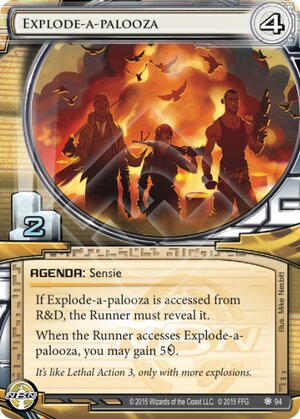 If Explode-a-palooza is accessed from R&D, the Runner must reveal it.

When the Runner accesses Explode-a-palooza, you may gain 5credit.

It's like Lethal Action 3, only with more explosions.
Illustrated by Mike Nesbitt
Decklists with this card

How does this compare to NAPD Contract? Well, we usually consider the Corp gaining money to be better than the runner losing money, and this gains more on access than the runner would lose when they access NAPD. Plus it doesn't have the drawback of being harder to score when you get bad publicity, which is relevant now that Valencia Estevez: The Angel of Cayambe is around and also frees you up to play illicit ice in your deck like Grim. The main drawback of this card compared to NAPD is that you never have the situation where the runner accesses it but is unable to steal it. (Plus it can only be used in NBN).

What does NBN do best? Either fast advance astrotrain, or Scorched Earth. Both of those strategies need a lot of credits to work, and both of them are not too concerned if the runner manages to steal an early agenda (in fact, if you're playing Midseason Replacements, you actually want them to steal an agenda... and this card gives you just enough money to play that operation. Coincidence?) Here is an example of a possible turn: Pop-up Window, SanSan City Grid, Explode-a-palooza. If the runner decides to run that server, steal your agenda and trash your SanSan, you gain 6 credits and the runner loses 6 credits. That's like you Account Siphon them, except that you're the corp. If they don't run it, you can score the agenda next turn.

The flavor of this card is the icing on an already delicious cake. Same old action movie, still gonna make a ton of profit out of it.

(The Valley era)
Lttlefoot 1221
Actually with Haarpsichord studios, if the runner already stole an agenda then they can't steal it at all. — Krondras 10 Apr 2015
With something like Red Herrings and Predictive Algorithms you can put the runner into a position where they simply can't steal the agenda... And you'll still get the 5 credits! — unitled 10 Apr 2015
Cool guys don't look at explosions! Yeaaaah! Cool guys don't look at explosions! — Xh4rx4d 11 Apr 2015
True that the runner can't steal the agenda if they have already stolen one that turn against Harpsichord, but if the runner has Film Critic s/he can park the second agenda there and retrieve it for two clicks. I don't know why FFG released Harpsichord in the same datapack as Film Critic. — wittela 27 Aug 2015
Also if the runner doesn't have a copy in score area; in archives with Old Hollywood Grid. Then can Jackson back into R&D if they make a 2nd run — unrezzedPADcampaign 3 Jun 2016
wittela - probably because if Film Critic didn't exist Haarpsichord would be overpowered as hell :v — LordRandomness 8 Jun 2016