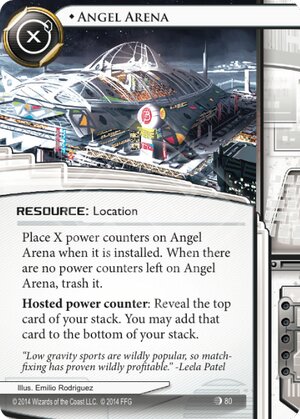 Come on man. Are you really looking for a review of this card here? Why are you even looking at this card?

There is no conceivable reason to put this in a deck. Eureka? Sure, but motivation is better, and you're losing as much as you sunk into it out of the already marginal value of Eureka. Windfall? No, don't be fooled, you shuffle before resolving Windfall, unless there is a paid ability window between the shuffle and the resolution. Which, there isn't.

If I won't play this card, no one should.

(The Universe of Tomorrow era)
x3r0h0ur 8719
But but but...I can use it to find and put Goverment Takeover on the bottom R&D. Oh wait, Keyhole exists. — Pikeman 22 Oct 2015
If you happend to have Gvernment Takeover in your Runner-Deck, you're doing something very, very, veeeeeery wrong. — haywire 22 Oct 2015
Or you have a Resource in your Corp-Deck. That would be kinda resourceful, but wrong nonetheless ;) — haywire 22 Oct 2015
http://boardgamegeek.com/article/17293536#17293536 — internet_potato 22 Oct 2015
ugh, hit submit by accident. Unfortunately, the "X" cost appears to reflect the number of credits you actually paid, you don't get a +10 bonus. This thread on BGG http://boardgamegeek.com/article/17293536#17293536 has a reasonable explanation. The relevant paragraph in the latest FAQ is "Rez Cost and Play Cost": Rez Cost & Play Cost Rez and play costs are formulas that take into account any effects that modify them. They are not just the printed number on the card. — internet_potato 22 Oct 2015
Just met a Will'o-the-Wisp that sent your Corroder to the bottom of your stack ? Install an Angel Arena with (number of cards left in your stack) - 1 counters. Problem solved ! — Lupus Yonderboi 22 Oct 2015
@just_doug He's saying that you could use Angel Arena to set up your next Eureka play, not install AA with Eureka. Or, at least, you could do that if you were terrible at Netrunner. — umchoyka 22 Oct 2015
It's like a neutral, neutered version of Mr. Li. You flip through cards looking for the one you want. It's not a bad card effect for $1 per card, but there are better ways to search your stack or simply draw cards. This card is the victim of better options. If it was in the Core box, it would see play until new packs make it obsolete. — bourgman 22 Oct 2015
It's the super combo card that makes my Big Girls Windfall Their Monoliths even jankier. I love this card now! — ila 23 Oct 2015
Window, maybe? Lets you put certain cards in stasis on the bottom of your stack until you need them...eh, probably not worth it. — LordRandomness 28 Jan 2016
1

The goal of this card is not to set up a combo in and of itself, so much as to be the tutor.

Don't think of it as the Eureka combo creator. Instead imagine you need to get a copy of Personal Workshop and a Order of Sol out to be able to start running as Nasir. And as Nasir with these cards set up you are ready to rock.

But this card has been out for more than a whole cycle and isn't setting the world on fire. So here's the issue... It is crazy expensive for something that isn't the only way to get things done.

Criminal? Mr. Li gives a very similar effect. Anarch? Try Paige Piper instead to simply thin your deck. Shaper simply says I'll use Diesel and Quality Time and then Levy AR Lab Access later to get my options back into play. While this card -- requires a huge upfront expenditure even for a tutor, and isn't a sure thing to even get your card.

So what would need to change in the meta for this to become a little more useful of a card? Well, if it did have internal combos that were easier to pull off that would help, but even then Motivation works better for most options that would work for Angel Arena.

Practically, until the need for at-will reveals of the top of your stack have a place, this card will always be one that stays in the binder crying "let me in coach." Even then, something may need to exist that makes good use of X cost cards for this to fire.

(The Universe of Tomorrow era)
Goldstep 90
Your influence assessment brings up an interesting point; AA is an influence-free tutor. Sunny and Adam might make some clever use of it. — FarCryFromHuman 23 Oct 2015
1

It gives you an exchange of credits for power to dig through your deck for what you need.

You click to install for X. Use those X counters to dig through your deck and maybe find what you needed. Draw it with the second click and perhaps you still have some counters left on the arena (which allows it to potentially be used multiple times with a single install) and a few clicks to play the card you drew.

Obviously the more counters you stack on it the better it is for finding anything. It is a tutor which can find anything, but becomes very expensive if you want it to be more effective.

(The Universe of Tomorrow era)
tendermovement 45
For what its worth, decks with Aesop's can sell this with 1 counter left to save 2 credits... — LynxMegaCorp 23 Oct 2015