Shuffle your grip and heap into your stack. Draw 5 cards. Remove Levy AR Lab Access from the game instead of trashing it.

Spend too much time in the AR Lab and someone might notice. Unless you're the head of it, that is.
Shaper • Lili Ibrahim • Creation and Control 35
All sets:
Links: Decklists | ANCUR 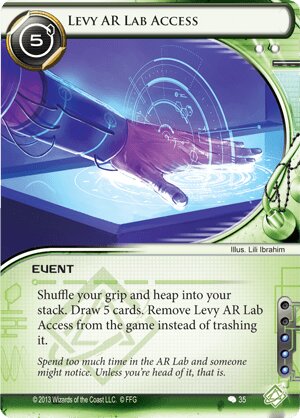 This is a powerful effect. The game is built on the premise that your deck has a finite lifespan: eventually you will run out of cards to draw. Of course, you could play with a 100 card deck, but if you do that, your deck is going to be wildly inconsistent. Levy allows you to double your deck's lifespan while letting you still play with a deck that is regular sized.

It feels nice to have a Levy in your deck. Did a card you really like get trashed? Are you worried you are going to run out of cards? Would you like to see those nice events you played again? Don't worry about it. Levy will come to the rescue. It feels good. It feels safe.

But sometimes, in deck construction, it is important to ask yourself how much work Levy is actually doing for you. Sometimes it is very important:

But sometimes, cutting Levy only helps the deck:

And you can compound your Levy problems even worse if you want to feel really safe... maybe you play a copy of Same Old Thing even though your deck doesn't especially care about repeating events, just to make sure you keep your ability to play Levy. Maybe you never play that copy of Déjà Vu you drew because you want to save it to get back Levy. That's bad!

When Levy is just a security blanket, and it isn't part of a definite plan, it's important to cut it to make your deck better. Thankfully, it is easy to tell if you should cut it. Play your decks a few times, and ask yourself:

If the answer is usually no, cut it! Levy is a very good card, but it is important to know when it isn't.

Also, if you are looking for a specific solution to decks that are trying to run you out of cards, you'll probably be better off with a more dedicated card like Feedback Filter or Net Shield.

(Intervention era)
Sanjay 2677
This is a necessary analysis of the 'Opportunity Cost' that many people forget about when slotting in Levy. I worry that some deckbuilders throw it into anything and everything to ape the good decks they've seen which utilized it for a specific purpose. Also love the Apex shout-out. — umbralAeronaut 8 Dec 2016
I'm glad you've liked the shout-out, umbralAeronaut. I've been doing a lot of Apex testing and your writing has been invaluable. — Sanjay 8 Dec 2016
5

So as the first review, I feel confident that many people are in the same boat as I am with this card: it's just not being used much. I intend to remedy that in my own play if possible. In the meantime, this is a review of theoretical combos...

Played with Comet on the board, you could redraw a fresh hand and then play a second event without spending a click.

Though the influence is high (3 points), it could help give MaxX: Maximum Punk Rock a new lease on life. Dug down and found some of the pieces you need? Start over and get the rest! Using event econ? Never quit your Day Job.

Noise: Hacker Extraordinaire is making great use of Aesop's Pawnshop for econ, with Grimoire + Cache and Déjà Vu and Surge . . . and he can get them all back, maybe even tutor them back out if he's using Djinn, if he spends some time in the Lab . . .

And of course it also gets back any important cards lost to damage of all kinds, and with all the tutors in Shaper (Self-modifying Code, Test Run, Trade-In) you could easily pull them from your deck once you've shuffled them back in.

Just some thoughts, I hope to find more as I play with this card!

(Breaker Bay era)
jrees 12
Any runner deck that uses a draw-heavy event-based econ will strongly consider this card. I literally see it all the time. — Bigguyforyou518 27 Apr 2015
Agreed. I feel like this is a very common card. I see it all of the time in many different types of decks. — Skillet_135 27 Apr 2015
I have 1x in my MaxX deck to prevent decking myself. It's quite useful. I've played it in a fair number of other Shaper decks as a reset too; again usually 1x. — nickv2002 27 Apr 2015
if you have a lot of card draw and events you can draw through your deck multiple times in one game. in that kind of deck you can use this card to re-use all those events and draw. Lucky find and hedge fund are good enough to want to play more then 3 times in a game. — tsuruki23 28 Apr 2015
Two top tier decks - RegAss MaxX and PPVP Kate use this card nearly every game... — king_mob 28 Apr 2015
Until trope comes out, MaxX gets 3 less influence because of this card. — cmcadvanced 28 Apr 2015
It seems I spoke too soon. — jrees 1 May 2015
Am I right in thinking that Blacklist ("Cards cannot leave the Runner's heap for any reason") wrecks this? — onehp 18 May 2015
Ekominded people get their rig razed? — Crashdown 26 May 2015
3

Why would you pay 5 to recycle your deck since it has already been used and your cards installed? The "draw back to five" effect is clearly not worth the credits and the horrifying influence.

(Kala Ghoda era)
Qualityreviews 21
Well all your event based economy cards will get another use, any programs/resources trashed by the corp can be regained and if you're using Faust you'll want those cards back to break ICE. — forthewhimsy 18 Feb 2016
How tow write a lazy ironique netrunner card review — gamblingworld 18 Feb 2016
1. Opening comment oposite to the consensu. 2. Highlight the benefits of the card and say they are negative factors implying that either yourself or everyoe else has misunderstood the card. 3. Talk about how the costs of the card do not return value bearing in mind the above factors. 3. Conclude opposite the consensu. Copngrats, you too can also write an ironic netrunner card review kids, scoring around 3/10 for comedy value. — gamblingworld 18 Feb 2016
Ga. — pang4 18 Feb 2016
@gamblingworld: quite the amazing analysis. Thank you for deconstructing these kinds of troll reviews. We really don't need them on the site. — pang4 18 Feb 2016
^Except for that one totally amazing and inscrutable review of Private Security Force. I'd be fine if we got like one of those every tweet two months or so. — forktines 18 Feb 2016
What's funny though is that if I recall, the number of reviews you can make is tied to your karma. — RubbishyUsername 18 Feb 2016
Noting every criticism lads. Hopefully my next text will be closer to a #qualityreview — Qualityreviews 19 Feb 2016