The rez cost of IQ is increased by 1 for each card in HQ.

IQ has +1 strength for each card in HQ.

Created by merging the brainscans of over a hundred of the most intelligent people in Haas-Bioroid's cerebral database, its effectiveness is limited beither by its lack of imagination or the imagination of the sysops who employ it.
Haas-Bioroid • Eko Puteh • First Contact 41
All sets:
Links: Decklists | ANCUR 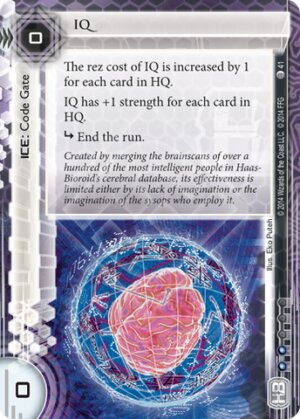 The first thing that springs to mind when considering this ICE is getting a big hand when it's being encountered. Panic Button is the obvious combo, and placing that and this on HQ can lock out a lot of fixed-strength access attempts and let you pay creds directly into your HQ defense to keep the runner out or at least tax them on a one-for-one basis (worse if their breaker is inefficient!). However, there's one big problem with this: D4v1d, which doesn't care if your ICE's strength is 5 or 50 and can crack this for a single counter if it's at 5+.

Thus against runners using D4v1d, we look to IQ's other possible benefits. One is getting a high strength Code Gate rezzed for cheap. Simply pop it up with little to no cards in HQ, then draw up. It helps that Jackson Howard is used by basically everybody and can click your hand up to 5 quick-smart the turn after rezzing, but there are problems with this approach (most notably, how are you handling any Agendas you've drawn? Keep them in HQ and hope they can't hit them while your hand is small? Dump them to Archives? Install them? Jackson helps with these things, but you have to trash him which means he's not available to draw back up after you rez)

The last approach, and I think the most interesting one, is to use IQ as a tuneable piece of ICE. You can rez it as a 5 cost 5 strength Code Gate, then let it drop to 4 when D4v1d shows up. Or do the reverse, bumping it up to 5 when Atman gets installed at the common 4-credit point. Do a triple install first turn and rez it for 3 to keep out runners with no Decoder, then let it grow bigger again to dodge the Yog.0 they searched out to handle it. The last option is particularly notable as you end up paying 3 for a 5-strength ICE, which is fairly nice.

Overall, this obviously fits best in a deck that naturally has a lot of hand size control (which generally means you can afford a click here or there to draw and/or have specific card drawing tools). If you can manage that, the ability to tweak the strength both up AND down combined with the potential for a discount rez can make IQ worth considering. It's one of those ICE that really needs the right deck to already be working WITHOUT it and then mostly serves to augment that deck, though. And watch out for accidentally milling yourself or filling up Archives/HQ with Agendas by mistake.

Lastly, look into a partnership with Errand Boy. It's a positional setup, sure, but both ICE are useful on their own and any Errand Boy subroutines that fire add strength to the ETR that will be firing off on IQ, meaning the option to just ignore Errand Boy is drastically diminished.

(Data and Destiny era)
LordRandomness 220
Executive Boot Camp lets you rez when you have few cards in hand and even gives you a discount as well. — Zakalwe 5 May 2016